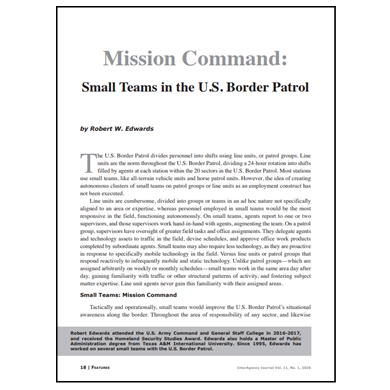 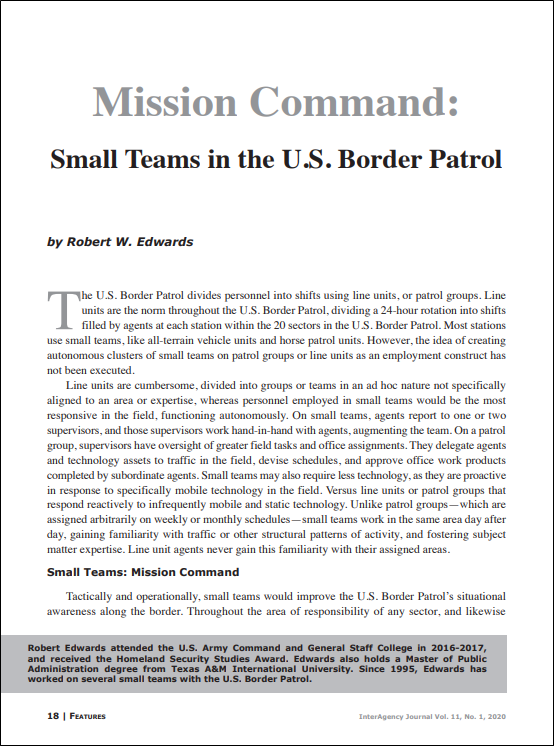 Line units are cumbersome, divided into groups or teams in an ad hoc nature not specifically aligned to an area or expertise, whereas personnel employed in small teams would be the most responsive in the field, functioning autonomously. On small teams, agents report to one or two supervisors, and those supervisors work hand-in-hand with agents, augmenting the team. On a patrol group, supervisors have oversight of greater field tasks and office assignments. They delegate agents and technology assets to traffic in the field, devise schedules, and approve office work products completed by subordinate agents. Small teams may also require less technology, as they are proactive in response to specifically mobile technology in the field. Versus line units or patrol groups that respond reactively to infrequently mobile and static technology. Unlike patrol groups—which are assigned arbitrarily on weekly or monthly schedules—small teams work in the same area day after day, gaining familiarity with traffic or other structural patterns of activity, and fostering subject matter expertise. Line unit agents never gain this familiarity with their assigned areas.

Tactically and operationally, small teams would improve the U.S. Border Patrol’s situational awareness along the border…