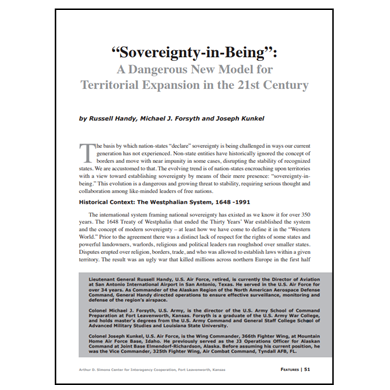 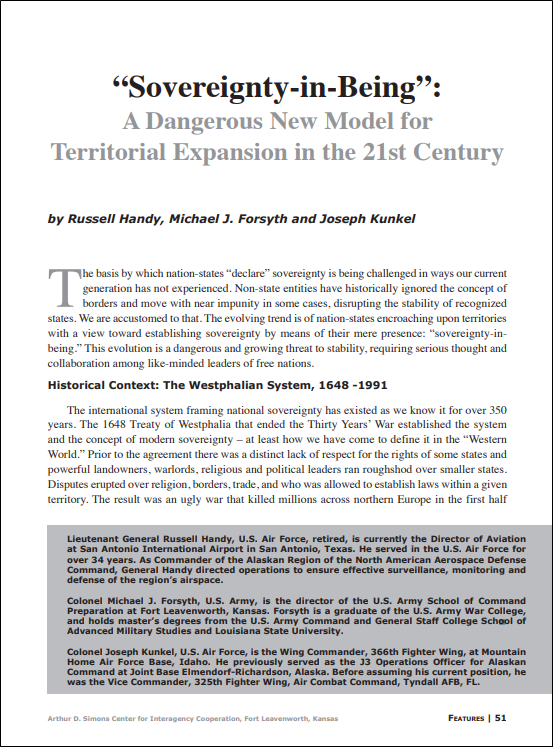 The basis by which nation-states “declare” sovereignty is being challenged in ways our current generation has not experienced. Non-state entities have historically ignored the concept of borders and move with near impunity in some cases, disrupting the stability of recognized states. We are accustomed to that. The evolving trend is of nation-states encroaching upon territories with a view toward establishing sovereignty by means of their mere presence: “sovereignty-inbeing.” This evolution is a dangerous and growing threat to stability, requiring serious thought and collaboration among like-minded leaders of free nations.

The international system framing national sovereignty has existed as we know it for over 350 years. The 1648 Treaty of Westphalia that ended the Thirty Years’ War established the system and the concept of modern sovereignty – at least how we have come to define it in the “Western World.” Prior to the agreement there was a distinct lack of respect for the rights of some states and powerful landowners, warlords, religious and political leaders ran roughshod over smaller states. Disputes erupted over religion, borders, trade, and who was allowed to establish laws within a given territory. The result was an ugly war that killed millions across northern Europe in the first half of the 17th century. The devastation of the land and loss of life finally exhausted the antagonists who met in a diplomatic congress to establish peace. The assembled ambassadors went beyond a simple peace treaty and completely revamped the concept of national sovereignty…

“Sovereignty-in-Being”: A Dangerous New Model for Territorial Expansion in the 21st Century PDF