Featured Article: The Business of War 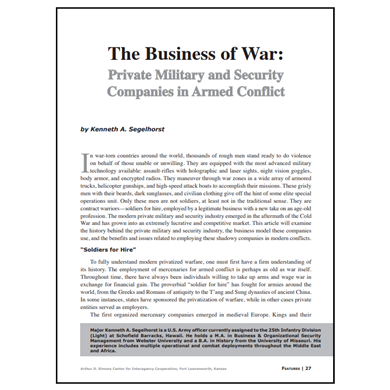 The Business of War: Private Military and Security Companies in Armed Conflict
by Kenneth A. Segelhorst 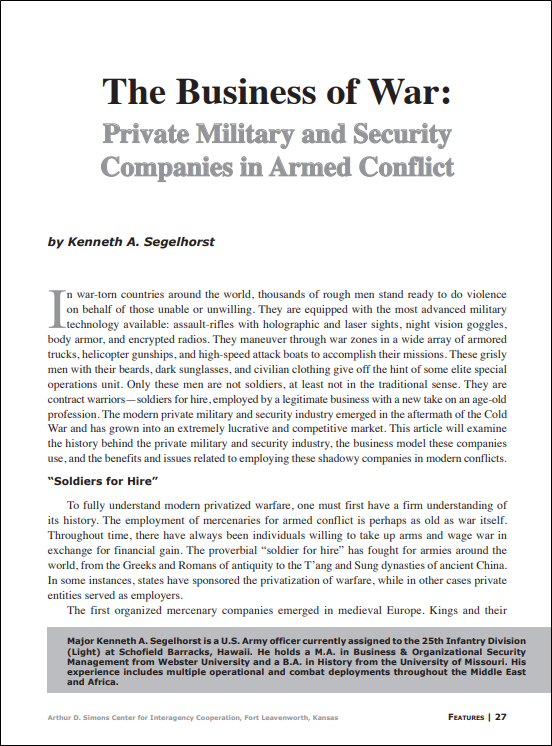 In war-torn countries around the world, thousands of rough men stand ready to do violence on behalf of those unable or unwilling. They are equipped with the most advanced military technology available: assault-rifles with holographic and laser sights, night vision goggles, body armor, and encrypted radios. They maneuver through war zones in a wide array of armored trucks, helicopter gunships, and high-speed attack boats to accomplish their missions. These grisly men with their beards, dark sunglasses, and civilian clothing give off the hint of some elite special operations unit. Only these men are not soldiers, at least not in the traditional sense. They are contract warriors—soldiers for hire, employed by a legitimate business with a new take on an age-old profession. The modern private military and security industry emerged in the aftermath of the Cold War and has grown into an extremely lucrative and competitive market. This article will examine the history behind the private military and security industry, the business model these companies use, and the benefits and issues related to employing these shadowy companies in modern conflicts.

To fully understand modern privatized warfare, one must first have a firm understanding of its history. The employment of mercenaries for armed conflict is perhaps as old as war itself. Throughout time, there have always been individuals willing to take up arms and wage war in exchange for financial gain. The proverbial “soldier for hire” has fought for armies around the world, from the Greeks and Romans of antiquity to the T’ang and Sung dynasties of ancient China. In some instances, states have sponsored the privatization of warfare, while in other cases private entities served as employers…

The Business of War: Private Military and Security Companies in Armed Conflict PDF