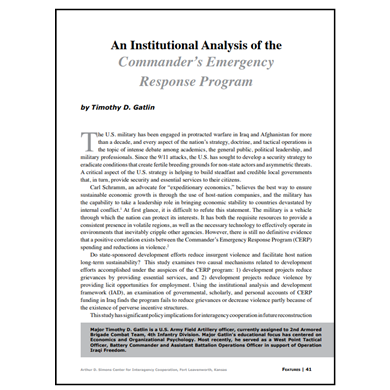 An Institutional Analysis of the Commander’s Emergency Response Program
by Timothy D. Gatlin 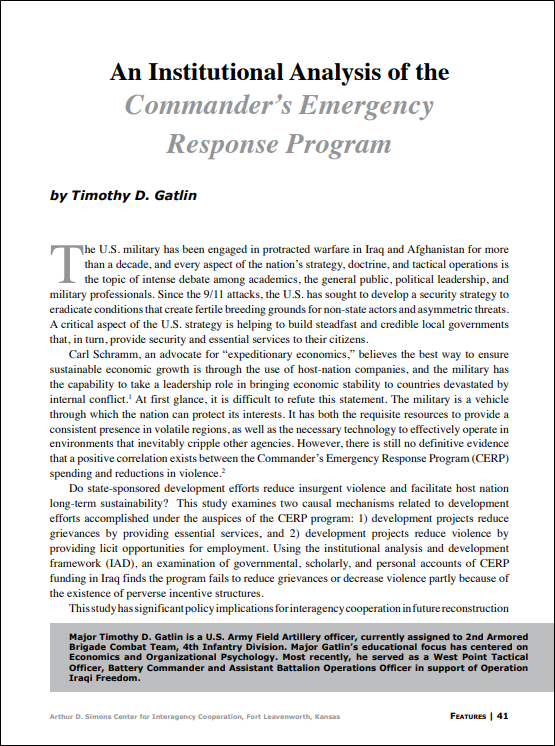 The U.S. military has been engaged in protracted warfare in Iraq and Afghanistan for more than a decade, and every aspect of the nation’s strategy, doctrine, and tactical operations is the topic of intense debate among academics, the general public, political leadership, and military professionals. Since the 9/11 attacks, the U.S. has sought to develop a security strategy to eradicate conditions that create fertile breeding grounds for non-state actors and asymmetric threats. A critical aspect of the U.S. strategy is helping to build steadfast and credible local governments that, in turn, provide security and essential services to their citizens.

Carl Schramm, an advocate for “expeditionary economics,” believes the best way to ensure sustainable economic growth is through the use of host-nation companies, and the military has the capability to take a leadership role in bringing economic stability to countries devastated by internal conflict. At first glance, it is difficult to refute this statement. The military is a vehicle through which the nation can protect its interests. It has both the requisite resources to provide a consistent presence in volatile regions, as well as the necessary technology to effectively operate in environments that inevitably cripple other agencies. However, there is still no definitive evidence that a positive correlation exists between the Commander’s Emergency Response Program (CERP) spending and reductions in violence.

An Institutional Analysis of the Commander’s Emergency Response Program PDF