Featured Article: The Decembrist Revolt and its Aftermath… 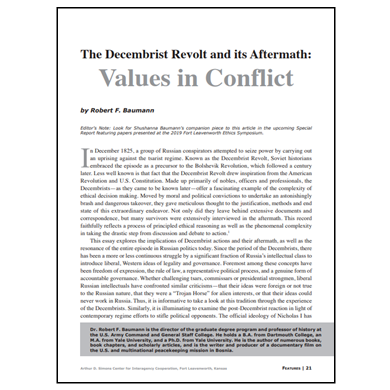 The Decembrist Revolt and its Aftermath: Values in Conflict
by Robert F. Baumann 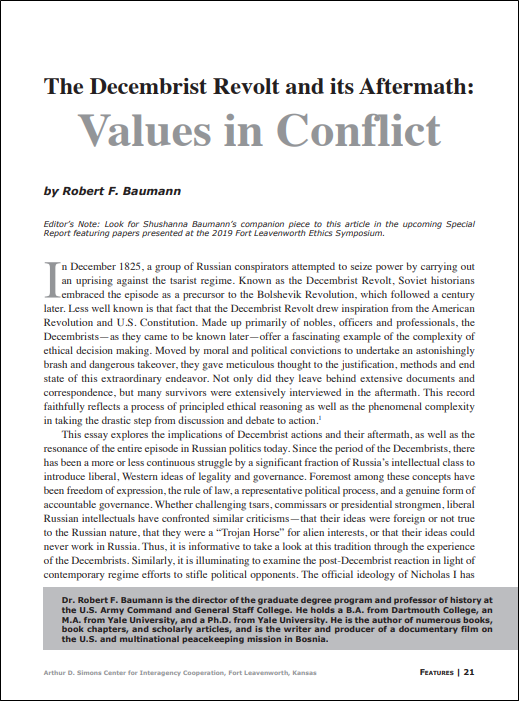 In December 1825, a group of Russian conspirators attempted to seize power by carrying out an uprising against the tsarist regime. Known as the Decembrist Revolt, Soviet historians embraced the episode as a precursor to the Bolshevik Revolution, which followed a century later. Less well known is that fact that the Decembrist Revolt drew inspiration from the American Revolution and U.S. Constitution. Made up primarily of nobles, officers and professionals, the Decembrists—as they came to be known later—offer a fascinating example of the complexity of ethical decision making. Moved by moral and political convictions to undertake an astonishingly brash and dangerous takeover, they gave meticulous thought to the justification, methods and end state of this extraordinary endeavor. Not only did they leave behind extensive documents and correspondence, but many survivors were extensively interviewed in the aftermath. This record faithfully reflects a process of principled ethical reasoning as well as the phenomenal complexity in taking the drastic step from discussion and debate to action.

This essay explores the implications of Decembrist actions and their aftermath, as well as the resonance of the entire episode in Russian politics today. Since the period of the Decembrists, there has been a more or less continuous struggle by a significant fraction of Russia’s intellectual class to introduce liberal, Western ideas of legality and governance. Foremost among these concepts have been freedom of expression, the rule of law, a representative political process, and a genuine form of accountable governance…

The Decembrist Revolt and its Aftermath: Values in Conflict PDF