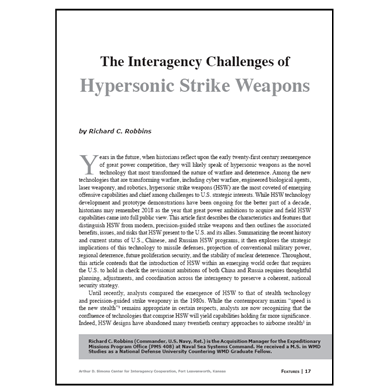 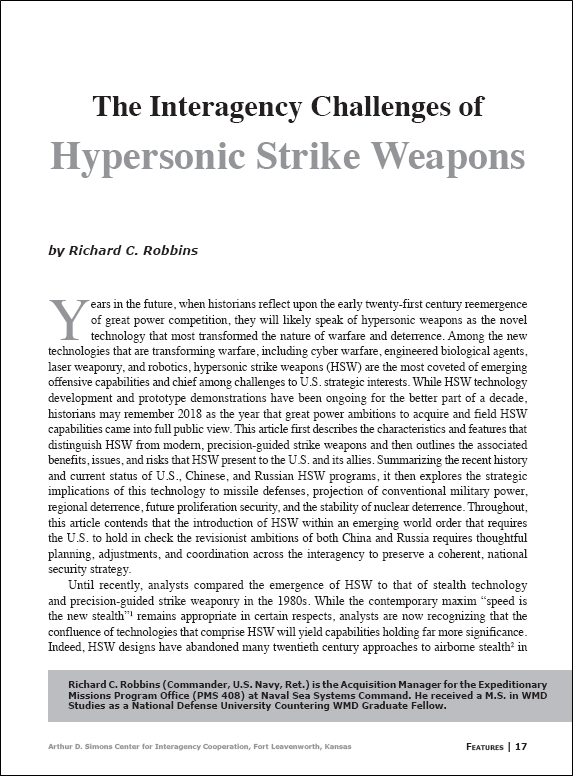 Years in the future, when historians reflect upon the early twenty-first century reemergence of great power competition, they will likely speak of hypersonic weapons as the novel technology that most transformed the nature of warfare and deterrence. Among the new technologies that are transforming warfare, including cyber warfare, engineered biological agents, laser weaponry, and robotics, hypersonic strike weapons (HSW) are the most coveted of emerging offensive capabilities and chief among challenges to U.S. strategic interests. While HSW technology development and prototype demonstrations have been ongoing for the better part of a decade, historians may remember 2018 as the year that great power ambitions to acquire and field HSW capabilities came into full public view. This article first describes the characteristics and features that distinguish HSW from modern, precision-guided strike weapons and then outlines the associated benefits, issues, and risks that HSW present to the U.S. and its allies. Summarizing the recent history and current status of U.S., Chinese, and Russian HSW programs, it then explores the strategic implications of this technology to missile defenses, projection of conventional military power, regional deterrence, future proliferation security, and the stability of nuclear deterrence. Throughout, this article contends that the introduction of HSW within an emerging world order that requires the U.S. to hold in check the revisionist ambitions of both China and Russia requires thoughtful planning, adjustments, and coordination across the interagency to preserve a coherent, national security strategy.

Until recently, analysts compared the emergence of HSW to that of stealth technology and precision-guided strike weaponry in the 1980s. While the contemporary maxim “speed is the new stealth” remains appropriate in certain respects, analysts are now recognizing that the confluence of technologies that comprise HSW will yield capabilities holding far more significance…