Featured Article: The Impact of Worldviews… 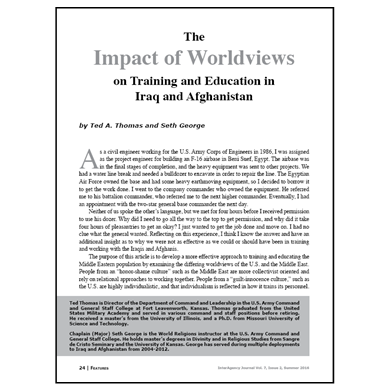 The Impact of Worldviews on Training and Education in Iraq and Afghanistan
by Ted A. Thomas and Seth George 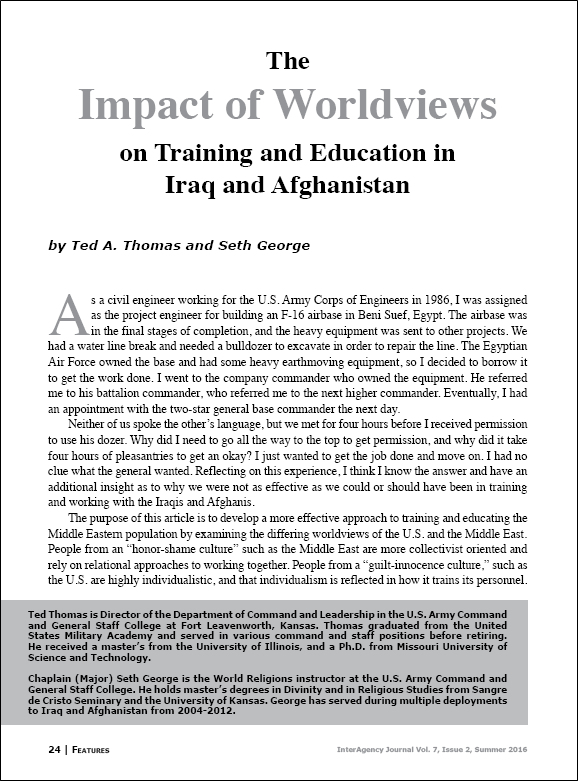 As a civil engineer working for the U.S. Army Corps of Engineers in 1986, I was assigned as the project engineer for building an F-16 airbase in Beni Suef, Egypt. The airbase was in the final stages of completion, and the heavy equipment was sent to other projects. We had a water line break and needed a bulldozer to excavate in order to repair the line. The Egyptian Air Force owned the base and had some heavy earthmoving equipment, so I decided to borrow it to get the work done. I went to the company commander who owned the equipment. He referred me to his battalion commander, who referred me to the next higher commander. Eventually, I had an appointment with the two-star general base commander the next day.

Neither of us spoke the other’s language, but we met for four hours before I received permission to use his dozer. Why did I need to go all the way to the top to get permission, and why did it take four hours of pleasantries to get an okay? I just wanted to get the job done and move on. I had no clue what the general wanted. Reflecting on this experience, I think I know the answer and have an additional insight as to why we were not as effective as we could or should have been in training and working with the Iraqis and Afghanis.

The purpose of this article is to develop a more effective approach to training and educating the Middle Eastern population by examining the differing worldviews of the U.S. and the Middle East…