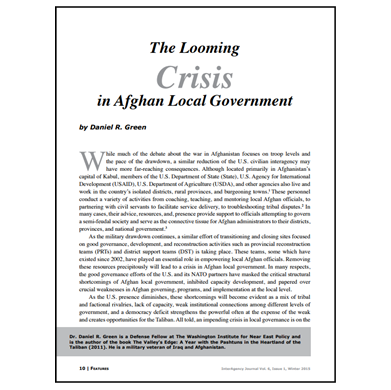 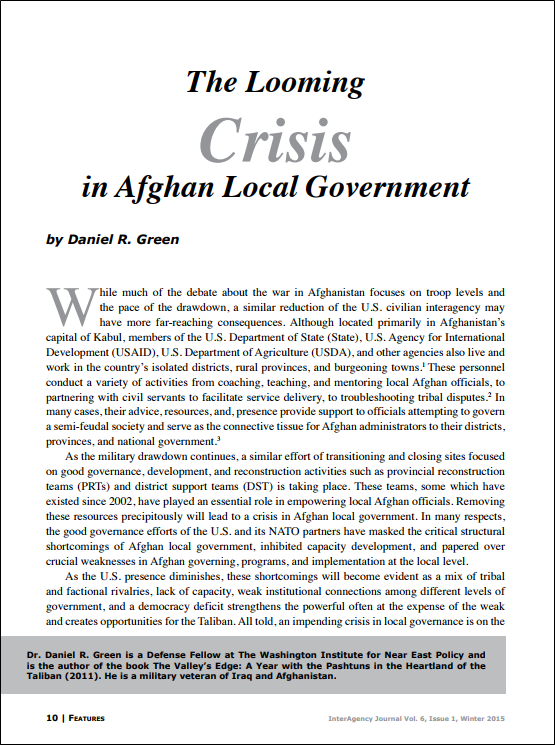 While much of the debate about the war in Afghanistan focuses on troop levels and the pace of the drawdown, a similar reduction of the U.S. civilian interagency may have more far-reaching consequences. Although located primarily in Afghanistan’s capital of Kabul, members of the U.S. Department of State (State), U.S. Agency for International Development (USAID), U.S. Department of Agriculture (USDA), and other agencies also live and work in the country’s isolated districts, rural provinces, and burgeoning towns. These personnel conduct a variety of activities from coaching, teaching, and mentoring local Afghan officials, to partnering with civil servants to facilitate service delivery, to troubleshooting tribal disputes. In many cases, their advice, resources, and, presence provide support to officials attempting to govern a semi-feudal society and serve as the connective tissue for Afghan administrators to their districts, provinces, and national government.

As the military drawdown continues, a similar effort of transitioning and closing sites focused on good governance, development, and reconstruction activities such as provincial reconstruction teams (PRTs) and district support teams (DST) is taking place. These teams, some which have
existed since 2002, have played an essential role in empowering local Afghan officials. Removing these resources precipitously will lead to a crisis in Afghan local government. In many respects, the good governance efforts of the U.S. and its NATO partners have masked the critical structural shortcomings of Afghan local government, inhibited capacity development, and papered over crucial weaknesses in Afghan governing, programs, and implementation at the local level.

As the U.S. presence diminishes, these shortcomings will become evident as a mix of tribal and factional rivalries, lack of capacity, weak institutional connections among different levels of government, and a democracy deficit strengthens the powerful often at the expense of the weak …