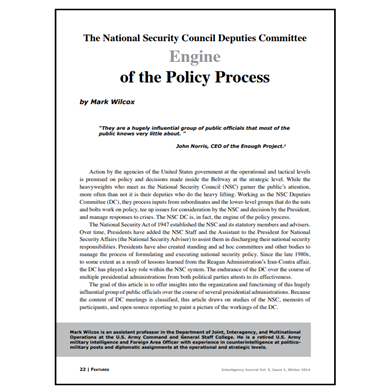 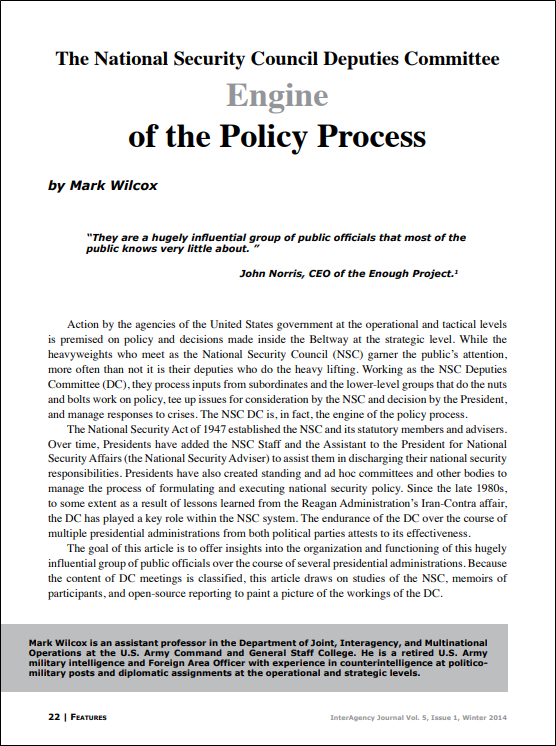 “They are a hugely influential group of public officials that most of the public knows very little about. ”

Action by the agencies of the United States government at the operational and tactical levels is premised on policy and decisions made inside the Beltway at the strategic level. While the heavyweights who meet as the National Security Council (NSC) garner the public’s attention, more often than not it is their deputies who do the heavy lifting. Working as the NSC Deputies Committee (DC), they process inputs from subordinates and the lower-level groups that do the nuts and bolts work on policy, tee up issues for consideration by the NSC and decision by the President, and manage responses to crises. The NSC DC is, in fact, the engine of the policy process.

The National Security Act of 1947 established the NSC and its statutory members and advisers. Over time, Presidents have added the NSC Staff and the Assistant to the President for National Security Affairs (the National Security Adviser) to assist them in discharging their national security responsibilities. Presidents have also created standing and ad hoc committees and other bodies to manage the process of formulating and executing national security policy. Since the late 1980s, to some extent as a result of lessons learned from the Reagan Administration’s Iran-Contra affair, the DC has played a key role within the NSC system. The endurance of the DC over the course of multiple presidential administrations from both political parties attests to its effectiveness.