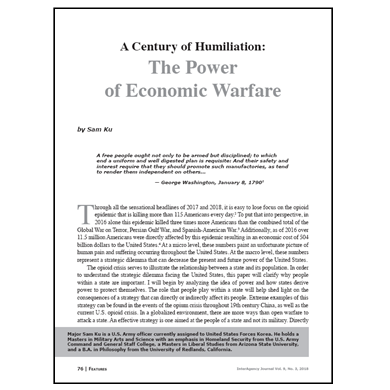 A Century of Humiliation: The Power of Economic Warfare
by Sam Ku 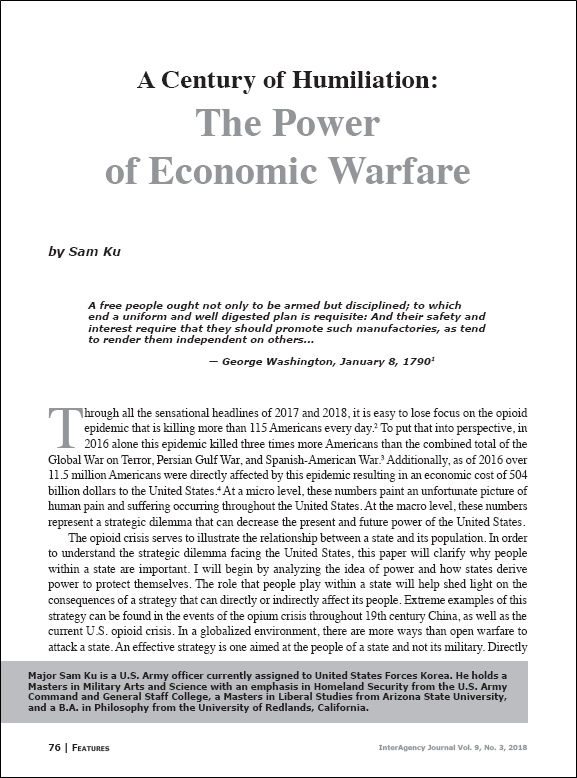 A free people ought not only to be armed but disciplined; to which end a uniform and well digested plan is requisite: And their safety and interest require that they should promote such manufactories, as tend to render them independent on others…
— George Washington, January 8, 1790

Through all the sensational headlines of 2017 and 2018, it is easy to lose focus on the opioid epidemic that is killing more than 115 Americans every day.2 To put that into perspective, in 2016 alone this epidemic killed three times more Americans than the combined total of the Global War on Terror, Persian Gulf War, and Spanish-American War.3 Additionally, as of 2016 over 11.5 million Americans were directly affected by this epidemic resulting in an economic cost of 504 billion dollars to the United States.4 At a micro level, these numbers paint an unfortunate picture of human pain and suffering occurring throughout the United States. At the macro level, these numbers represent a strategic dilemma that can decrease the present and future power of the United States.

The opioid crisis serves to illustrate the relationship between a state and its population. In order to understand the strategic dilemma facing the United States, this paper will clarify why people within a state are important. I will begin by analyzing the idea of power and how states derive power to protect themselves. The role that people play within a state will help shed light on the consequences of a strategy that can directly or indirectly affect its people. Extreme examples of this strategy can be found in the events of the opium crisis throughout 19th century China, as well as the current U.S. opioid crisis. In a globalized environment, there are more ways than open warfare to attack a state. An effective strategy is one aimed at the people of a state and not its military…

A Century of Humiliation: The Power of Economic Warfare PDF