Featured Article: The Reality of the So-Called U.S. Pivot to Asia 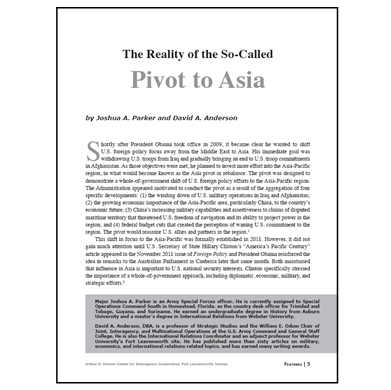 The Reality of the So-Called U.S. Pivot to Asia
by Joshua Parker and David A. Anderson 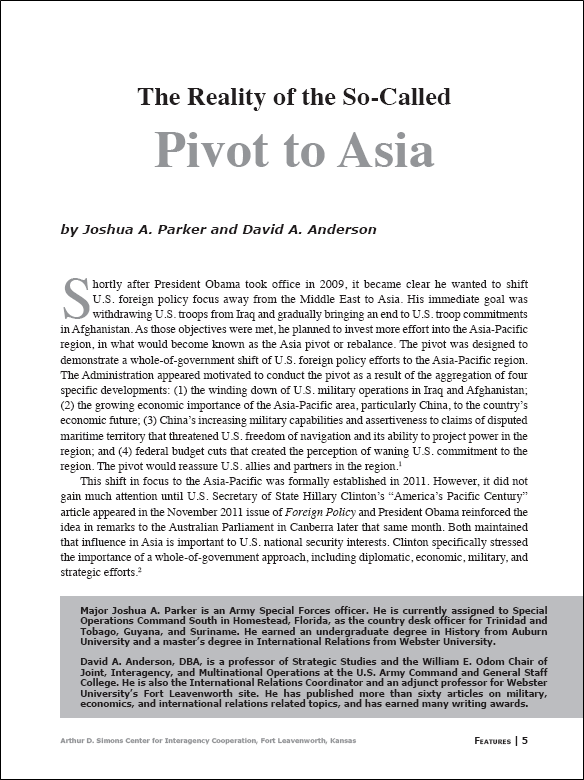 Shortly after President Obama took office in 2009, it became clear he wanted to shift U.S. foreign policy focus away from the Middle East to Asia. His immediate goal was withdrawing U.S. troops from Iraq and gradually bringing an end to U.S. troop commitments in Afghanistan. As those objectives were met, he planned to invest more effort into the Asia-Pacific region, in what would become known as the Asia pivot or rebalance. The pivot was designed to demonstrate a whole-of-government shift of U.S. foreign policy efforts to the Asia-Pacific region. The Administration appeared motivated to conduct the pivot as a result of the aggregation of four specific developments: (1) the winding down of U.S. military operations in Iraq and Afghanistan; (2) the growing economic importance of the Asia-Pacific area, particularly China, to the country’s economic future; (3) China’s increasing military capabilities and assertiveness to claims of disputed maritime territory that threatened U.S. freedom of navigation and its ability to project power in the region; and (4) federal budget cuts that created the perception of waning U.S. commitment to the region. The pivot would reassure U.S. allies and partners in the region.

This shift in focus to the Asia-Pacific was formally established in 2011. However, it did not gain much attention until U.S. Secretary of State Hillary Clinton’s “America’s Pacific Century” article appeared in the November 2011 issue of Foreign Policy and President Obama reinforced the idea in remarks to the Australian Parliament in Canberra later that same month. Both maintained that influence in Asia is important to U.S. national security interests. Clinton specifically stressed the importance of a whole-of-government approach, including diplomatic, economic, military, and strategic efforts...

The Reality of the So-Called U.S. Pivot to Asia PDF