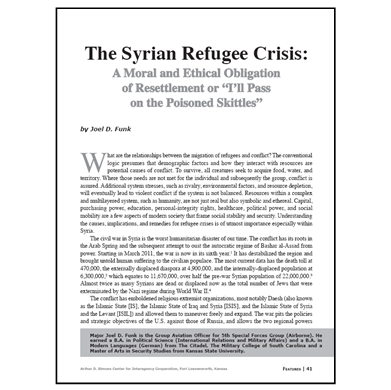 The Syrian Refugee Crisis: A Moral and Ethical Obligation of Resettlement
or “I’ll Pass on the Poisoned Skittles”
by Joel D. Funk 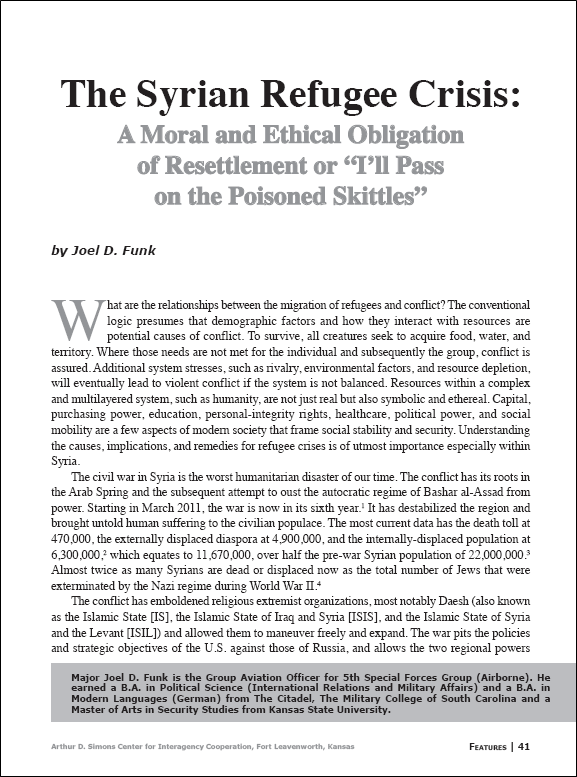 What are the relationships between the migration of refugees and conflict? The conventional logic presumes that demographic factors and how they interact with resources are potential causes of conflict. To survive, all creatures seek to acquire food, water, and territory. Where those needs are not met for the individual and subsequently the group, conflict is assured. Additional system stresses, such as rivalry, environmental factors, and resource depletion, will eventually lead to violent conflict if the system is not balanced. Resources within a complex and multilayered system, such as humanity, are not just real but also symbolic and ethereal. Capital, purchasing power, education, personal-integrity rights, healthcare, political power, and social mobility are a few aspects of modern society that frame social stability and security. Understanding the causes, implications, and remedies for refugee crises is of utmost importance especially within Syria.

The civil war in Syria is the worst humanitarian disaster of our time. The conflict has its roots in the Arab Spring and the subsequent attempt to oust the autocratic regime of Bashar al-Assad from power. Starting in March 2011, the war is now in its sixth year. It has destabilized the region and brought untold human suffering to the civilian populace. The most current data has the death toll at 470,000, the externally displaced diaspora at 4,900,000, and the internally-displaced population at 6,300,000, which equates to 11,670,000, over half the pre-war Syrian population of 22,000,000. Almost twice as many Syrians are dead or displaced now as the total number of Jews that were exterminated by the Nazi regime during World War II.

The Syrian Refugee Crisis: A Moral and Ethical Obligation of Resettlement
or “I’ll Pass on the Poisoned Skittles” PDF