Featured Article: There is No Silver Bullet and Other Lessons from Colombia 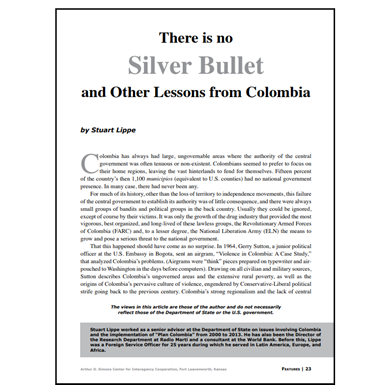 Colombia has always had large, ungovernable areas where the authority of the central government was often tenuous or non-existent. Colombians seemed to prefer to focus on their home regions, leaving the vast hinterlands to fend for themselves. Fifteen percent of the country’s then 1,100 municipios (equivalent to U.S. counties) had no national government presence. In many case, there had never been any.

For much of its history, other than the loss of territory to independence movements, this failure of the central government to establish its authority was of little consequence, and there were always small groups of bandits and political groups in the back country. Usually they could be ignored, except of course by their victims. It was only the growth of the drug industry that provided the most vigorous, best organized, and long-lived of these lawless groups, the Revolutionary Armed Forces of Colombia (FARC) and, to a lesser degree, the National Liberation Army (ELN) the means to grow and pose a serious threat to the national government.

That this happened should have come as no surprise. In 1964, Gerry Sutton, a junior political officer at the U.S. Embassy in Bogota, sent an airgram, “Violence in Colombia: A Case Study,” that analyzed Colombia’s problems. (Airgrams were “think” pieces prepared on typewriter and airpouched to Washington in the days before computers). Drawing on all civilian and military sources, Sutton describes Colombia’s ungoverned areas and the extensive rural poverty, as well as the origins of Colombia’s pervasive culture of violence, engendered by Conservative-Liberal political strife going back to the previous century Colombia’s strong regionalism and the lack of central government authority allowed rural fighting to flourish…

There is No Silver Bullet and Other Lessons from Colombia PDF