Featured Article: The Economics of Trade and National Security 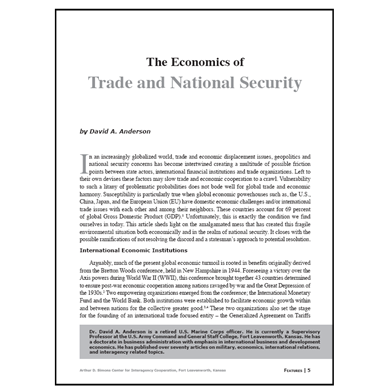 The Economics of Trade and National Security
by David A. Anderson 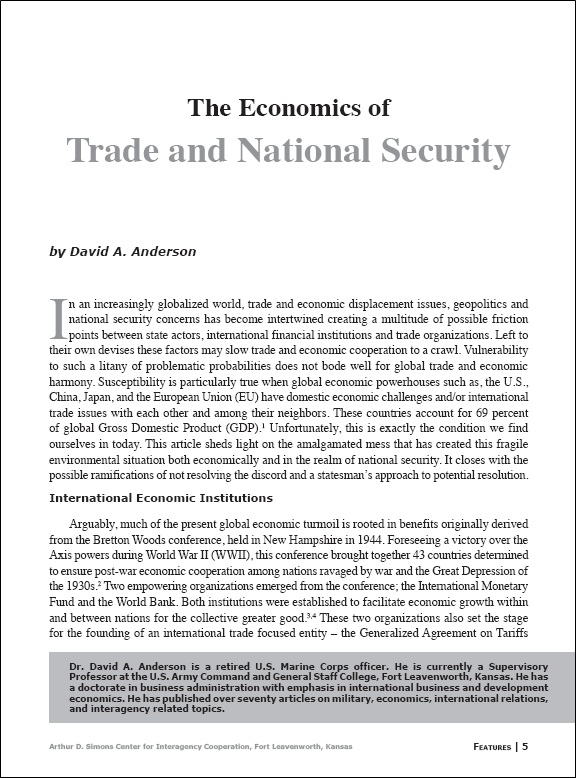 In an increasingly globalized world, trade and economic displacement issues, geopolitics and national security concerns has become intertwined creating a multitude of possible friction points between state actors, international financial institutions and trade organizations. Left to their own devises these factors may slow trade and economic cooperation to a crawl. Vulnerability to such a litany of problematic probabilities does not bode well for global trade and economic harmony. Susceptibility is particularly true when global economic powerhouses such as, the U.S., China, Japan, and the European Union (EU) have domestic economic challenges and/or international trade issues with each other and among their neighbors. These countries account for 69 percent of global Gross Domestic Product (GDP). Unfortunately, this is exactly the condition we find ourselves in today. This article sheds light on the amalgamated mess that has created this fragile environmental situation both economically and in the realm of national security. It closes with the possible ramifications of not resolving the discord and a statesman’s approach to potential resolution.

Arguably, much of the present global economic turmoil is rooted in benefits originally derived from the Bretton Woods conference, held in New Hampshire in 1944. Foreseeing a victory over the Axis powers during World War II (WWII), this conference brought together 43 countries determined to ensure post-war economic cooperation among nations ravaged by war and the Great Depression of the 1930s. Two empowering organizations emerged from the conference; the International Monetary Fund and the World Bank. Both institutions were established to facilitate economic growth within and between nations for the collective greater good…

The Economics of Trade and National Security PDF