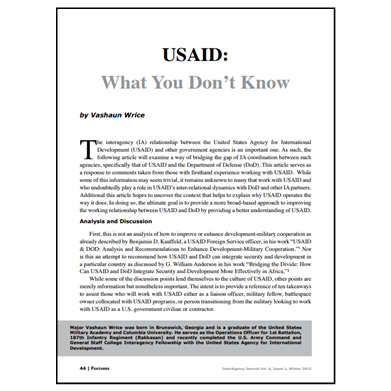 USAID: What You Don’t Know
by Vashaun Wrice 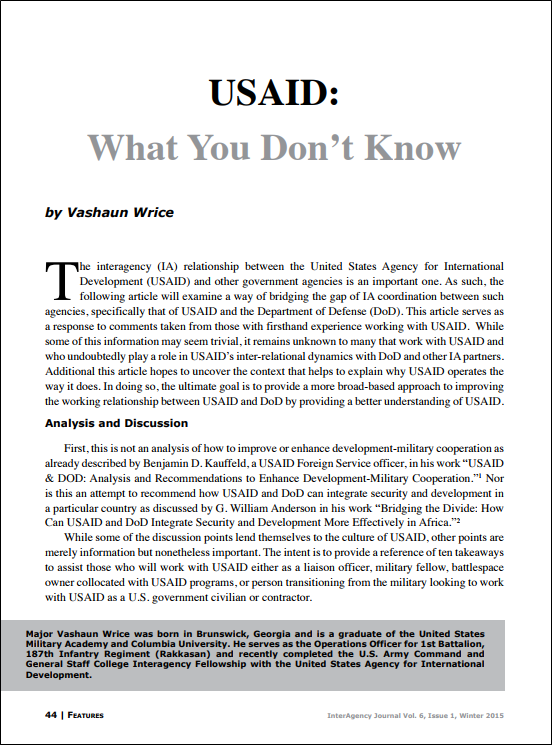 The interagency (IA) relationship between the United States Agency for International Development (USAID) and other government agencies is an important one. As such, the following article will examine a way of bridging the gap of IA coordination between such agencies, specifically that of USAID and the Department of Defense (DoD). This article serves as a response to comments taken from those with firsthand experience working with USAID. While some of this information may seem trivial, it remains unknown to many that work with USAID and who undoubtedly play a role in USAID’s inter-relational dynamics with DoD and other IA partners. Additional this article hopes to uncover the context that helps to explain why USAID operates the way it does. In doing so, the ultimate goal is to provide a more broad-based approach to improving the working relationship between USAID and DoD by providing a better understanding of USAID.

First, this is not an analysis of how to improve or enhance development-military cooperation as already described by Benjamin D. Kauffeld, a USAID Foreign Service officer, in his work “USAID & DOD: Analysis and Recommendations to Enhance Development-Military Cooperation.” Nor is this an attempt to recommend how USAID and DoD can integrate security and development in a particular country as discussed by G. William Anderson in his work “Bridging the Divide: How Can USAID and DoD Integrate Security and Development More Effectively in Africa.”

While some of the discussion points lend themselves to the culture of USAID, other points are merely information but nonetheless important. The intent is to provide a reference of ten takeaways to assist those who will work with USAID…

USAID: What You Don’t Know PDF