Featured Article: What Makes the JIIM so Different? 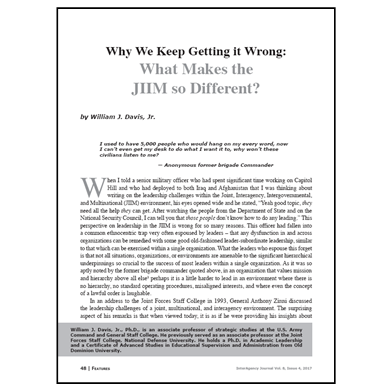 Why We Keep Getting it Wrong: What Makes the JIIM so Different?
by William J. Davis, Jr. 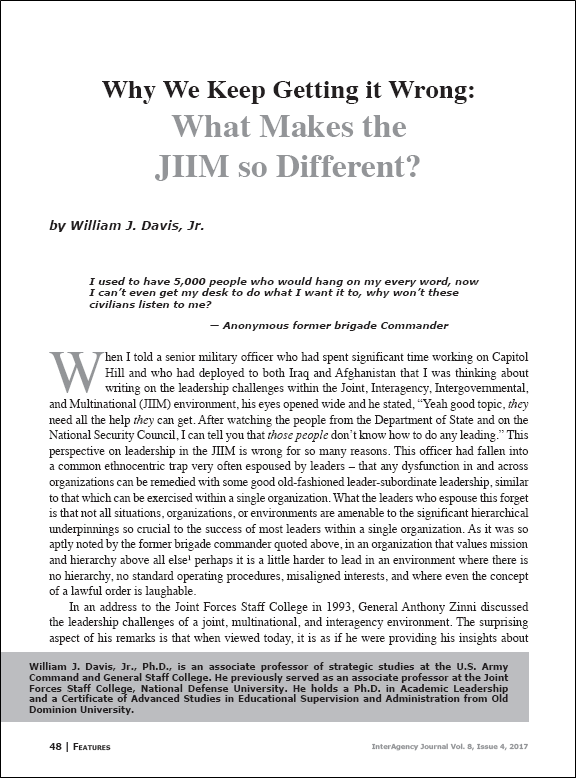 When I told a senior military officer who had spent significant time working on Capitol Hill and who had deployed to both Iraq and Afghanistan that I was thinking about writing on the leadership challenges within the Joint, Interagency, Intergovernmental, and Multinational (JIIM) environment, his eyes opened wide and he stated, “Yeah good topic, they need all the help they can get. After watching the people from the Department of State and on the National Security Council, I can tell you that those people don’t know how to do any leading.” This perspective on leadership in the JIIM is wrong for so many reasons. This officer had fallen into a common ethnocentric trap very often espoused by leaders – that any dysfunction in and across organizations can be remedied with some good old-fashioned leader-subordinate leadership, similar to that which can be exercised within a single organization. What the leaders who espouse this forget is that not all situations, organizations, or environments are amenable to the significant hierarchical underpinnings so crucial to the success of most leaders within a single organization. As it was so aptly noted by the former brigade commander quoted above, in an organization that values mission and hierarchy above all else perhaps it is a little harder to lead in an environment where there is no hierarchy, no standard operating procedures, misaligned interests, and where even the concept of a lawful order is laughable.

In an address to the Joint Forces Staff College in 1993, General Anthony Zinni discussed the leadership challenges of a joint, multinational, and interagency environment. The surprising aspect of his remarks is that when viewed today, it is as if he were providing his insights about the current JIIM environment. It appears that in the past quarter century, the dynamics and associated problems with leading in that environment have neither changed nor been solved. The same issues are endemic. Some may offer that it is the institutional structure that begets the problems, but it might be offered that the traditional leader-subordinate model of leadership considered desirable and practiced within most organizations does not prepare leaders to excel in an environment that has little structure…

Why We Keep Getting it Wrong: What Makes the JIIM so Different? PDF