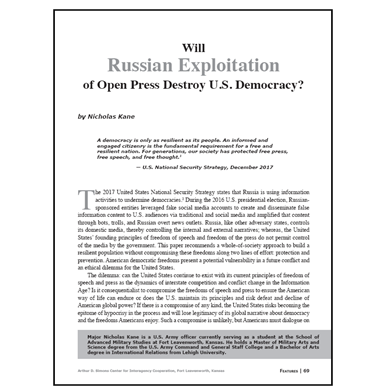 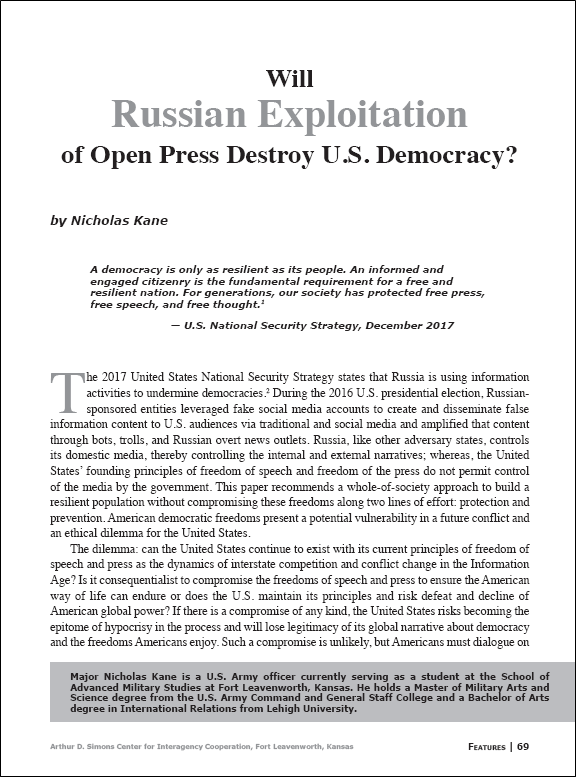 A democracy is only as resilient as its people. An informed and engaged citizenry is the fundamental requirement for a free and resilient nation. For generations, our society has protected free press, free speech, and free thought.
— U.S. National Security Strategy, December 2017

The 2017 United States National Security Strategy states that Russia is using information activities to undermine democracies. During the 2016 U.S. presidential election, Russian-sponsored entities leveraged fake social media accounts to create and disseminate false information content to U.S. audiences via traditional and social media and amplified that content through bots, trolls, and Russian overt news outlets. Russia, like other adversary states, controls its domestic media, thereby controlling the internal and external narratives; whereas, the United States’ founding principles of freedom of speech and freedom of the press do not permit control of the media by the government. This paper recommends a whole-of-society approach to build a resilient population without compromising these freedoms along two lines of effort: protection and prevention. American democratic freedoms present a potential vulnerability in a future conflict and an ethical dilemma for the United States.

The dilemma: can the United States continue to exist with its current principles of freedom of speech and press as the dynamics of interstate competition and conflict change in the Information Age? Is it consequentialist to compromise the freedoms of speech and press to ensure the American way of life can endure or does the U.S. maintain its principles and risk defeat and decline of American global power? If there is a compromise of any kind, the United States risks becoming the epitome of hypocrisy…