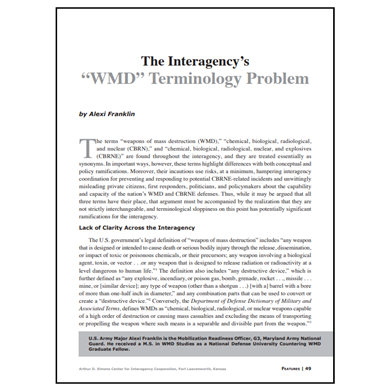 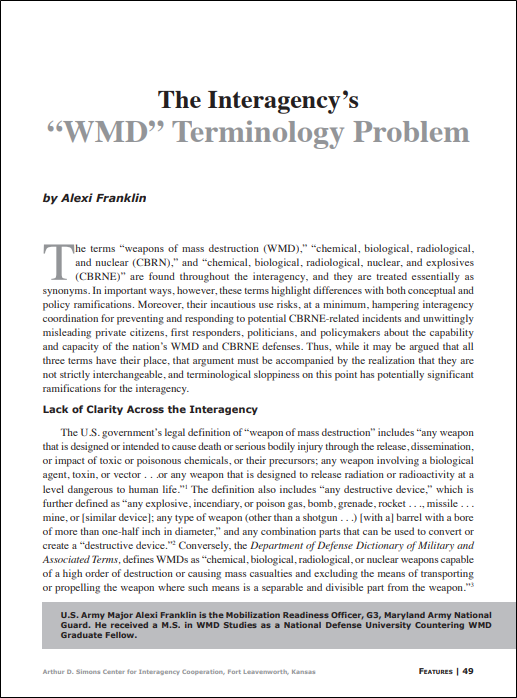 The terms “weapons of mass destruction (WMD),” “chemical, biological, radiological, and nuclear (CBRN),” and “chemical, biological, radiological, nuclear, and explosives (CBRNE)” are found throughout the interagency, and they are treated essentially as synonyms. In important ways, however, these terms highlight differences with both conceptual and policy ramifications. Moreover, their incautious use risks, at a minimum, hampering interagency coordination for preventing and responding to potential CBRNE-related incidents and unwittingly misleading private citizens, first responders, politicians, and policymakers about the capability and capacity of the nation’s WMD and CBRNE defenses. Thus, while it may be argued that all three terms have their place, that argument must be accompanied by the realization that they are not strictly interchangeable, and terminological sloppiness on this point has potentially significant ramifications for the interagency.

The U.S. government’s legal definition of “weapon of mass destruction” includes “any weapon that is designed or intended to cause death or serious bodily injury through the release, dissemination, or impact of toxic or poisonous chemicals, or their precursors; any weapon involving a biological agent, toxin, or vector . . .or any weapon that is designed to release radiation or radioactivity at a level dangerous to human life.” The definition also includes “any destructive device,” which is further defined as “any explosive, incendiary, or poison gas, bomb, grenade, rocket . . ., missile . . . mine, or [similar device]; any type of weapon (other than a shotgun . . .) [with a] barrel with a bore of more than one-half inch in diameter,” and any combination parts that can be used to convert or create a “destructive device.” Conversely, the Department of Defense Dictionary of Military and Associated Terms, defines WMDs as “chemical, biological, radiological, or nuclear weapons capable of a high order of destruction or causing mass casualties and excluding the means of transporting or propelling the weapon where such means is a separable and divisible part from the weapon…”