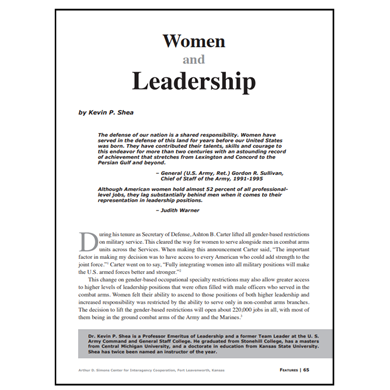 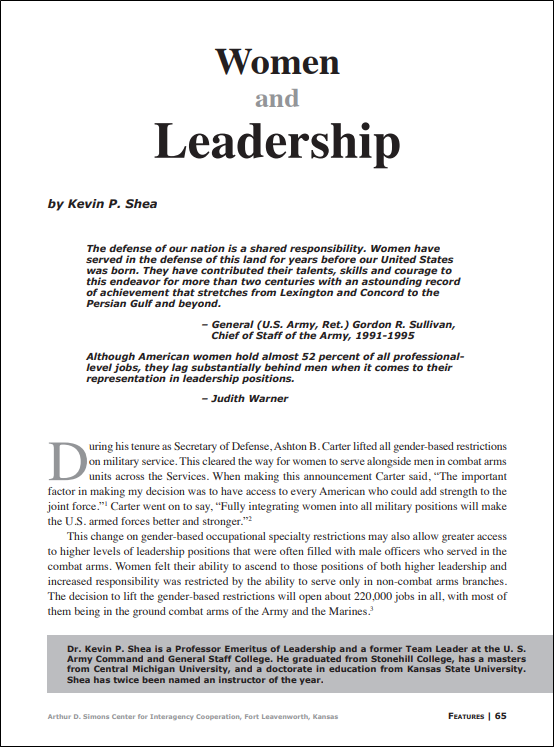 The defense of our nation is a shared responsibility. Women have served in the defense of this land for years before our United States was born. They have contributed their talents, skills and courage to this endeavor for more than two centuries with an astounding record of achievement that stretches from Lexington and Concord to the Persian Gulf and beyond.
– General (U.S. Army, Ret.) Gordon R. Sullivan, Chief of Staff of the Army, 1991-1995

Although American women hold almost 52 percent of all professional-level jobs, they lag substantially behind men when it comes to their representation in leadership positions.
– Judith Warner

During his tenure as Secretary of Defense, Ashton B. Carter lifted all gender-based restrictions on military service. This cleared the way for women to serve alongside men in combat arms units across the Services. When making this announcement Carter said, “The important factor in making my decision was to have access to every American who could add strength to the joint force.” Carter went on to say, “Fully integrating women into all military positions will make the U.S. armed forces better and stronger.”

This change on gender-based occupational specialty restrictions may also allow greater access to higher levels of leadership positions that were often filled with male officers who served in the combat arms. Women felt their ability to ascend to those positions of both higher leadership and increased responsibility was restricted by the ability to serve only in non-combat arms branches. The decision to lift the gender-based restrictions will open about 220,000 jobs in all, with most of them being in the ground combat arms of the Army and the Marines…