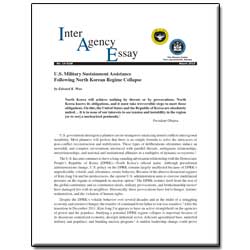 This essay examines the combined response efforts that would be required of the U.S. military, U.S. government, nongovernmental organizations, and international partners in the event of regime collapse in North Korea. The author focuses on the humanitarian and stabilization aspects of the response, including the plight of internally displaced persons and the far reaching economic effects of a potential regime collapse. The author cites North Korea’s general instability, prior bouts of famine, and existing struggles with hunger, their economy, and infrastructure as compounding issues that would lead to greater devastation in the event of regime collapse.

The essay analyzes the sustainment units and equipment required to support the military forces and internally displaced persons in the event of a regime collapse scenario in North Korea. The essay aims to enable planners to determine how to dependably support and sustain South Korea in the best political, economic, and strategic interests of the U.S. 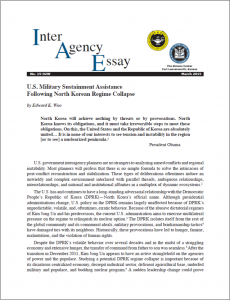