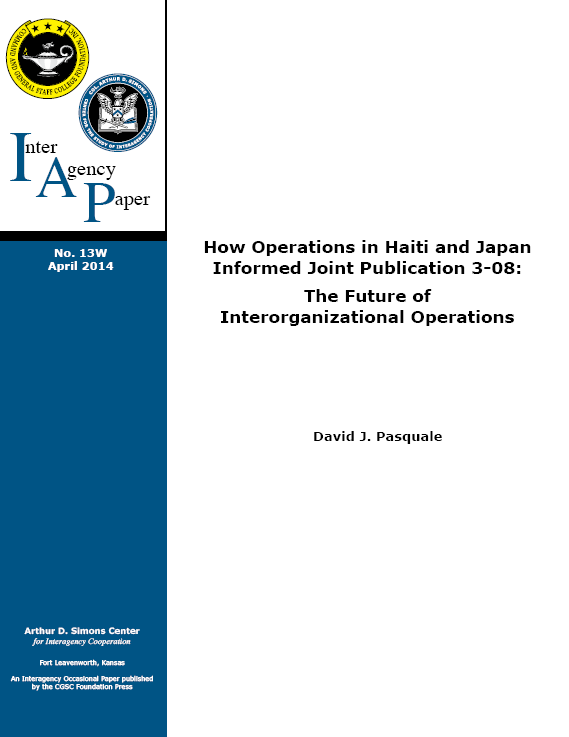 Since September 2001, numerous agencies within the United States government have contributed to the efforts in Iraq and Afghanistan. While the Department of Defense (DoD) and other organizations have benefitted from the interaction and the joint learning environment these missions provided, these opportunities will no longer be available after the end to U.S. efforts in Afghanistan in 2014.

However, Foreign Disaster Relief (FDR) will still require a whole-of-government approach to save lives and relieve suffering. While joint doctrine has evolved to address actions in Iraq and Afghanistan, there remain gaps from historical lessons learned in terms of FDR. As the opportunities for interorganizational interaction decrease, it is important for DoD to capture lessons learned from its most recent FDR missions to allow for “the integration of skills and capabilities within our military and civilian institutions, so they complement each other and operate seamlessly.”

Drawing on lessons learned during the U.S. responses the earthquake in Haiti in January 2010 (Operation Unified Response) and the tsunami in Japan in March 2011 (Operation Tomodachi), the U.S. government and DoD have the opportunity to look at their approaches to the whole-of-government method. To what degree does the guiding doctrine, Joint Publication 3-08 (JP 3-08), Interorganizational Coordination during Joint Operations, published in March 2011, reflect the lessons learned from two incredible natural disasters to inform future joint commanders and staffs?

This paper examines the U.S. responses to the disasters in Haiti and Japan, and how these Operations informed government policy and doctrine, including JP 3-08. The author concludes the paper by stating that while Operations Unified Response and Tomodachi were successful, mistakes were made that could have been prevented, and calls for DoD to codify lessons learned into doctrine that can be used by future joint leaders. 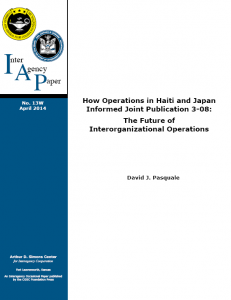