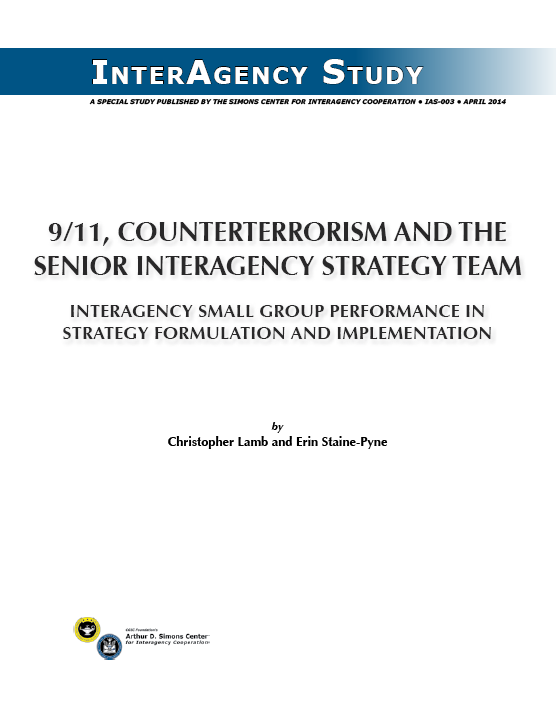 The belief that better information-sharing among national security departments and agencies could have prevented 9/11 motivated the President and Congress to create new institutions to safeguard the nation against catastrophic terrorist attacks. The National Counterterrorism Center in particular was designed to improve interagency coordination for the counterterrorism mission. Inside the Center, a small interagency group called the “Senior Interagency Strategy Team” (SIST) was established to serve as the primary organizational mechanism for interagency collaboration. Initially, the high-level group was successful. Buoyed by the national counterterrorism consensus following 9/11, the group produced the first National Implementation Plan for the War on Terror. However, the plan was poorly received, and the SIST’s prominent role and productivity fell precipitously thereafter, so much so that all subsequent leaders of the group questioned the value of its existence.

The rise and fall of the SIST is a fascinating case study of interagency collaboration. The SIST was assigned a key role in what is arguably the national security system’s most important mission area—countering terrorists and particularly terrorists trying to strike the U.S. with weapons of mass destruction. Yet it failed. This case study explains how and why it failed. Contrary to what the 9/11 Commission Report suggested, this study argues that good people cannot always overcome bad organizational structure. The SIST’s creators hoped that having its members faithfully represent their parent agencies’ positions would yield cooperation and strategic solutions. However in the current system, faithfully representing department and agency concerns made it impossible for SIST members to make the necessary tradeoffs in organizational equities that might have yielded a real strategy for counterterrorism. The SIST lives on, absorbing scarce and expensive counterterrorism expertise—too disappointing to revitalize but too evocative of hopes for better interagency collaboration to kill outright.