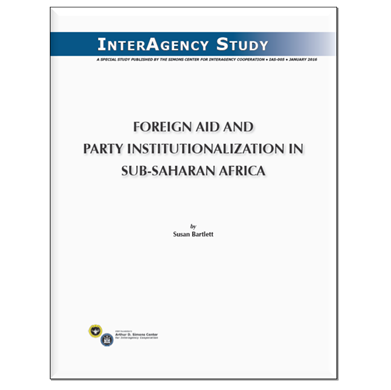 Government, non-government, and military entities have all been involved in providing foreign aid for quite some time, but despite the emphasis that states and international organizations and institutions place on the utility of foreign aid, there is significant debate about its benefits. The debate centers on the potentially deleterious or null effects that specific forms of aid can have on a recipient state. While some research suggests that aid can reduce the prevalence of conflict, prevent the outbreak of conflict, or even reduce the incidence of terrorism, other research suggests that various types of foreign aid are, at best, benign and, at worst, undermine stability and development.

This study attempts to merge these research agendas by providing a broad initial examination into the impact that democratization aid and military aid have upon party system institutionalization. The author examines the relationship between democratization aid and military aid to determine if the two forms of aid assist each other in bringing stability and advancing development, or if the two forms of aid undermine the purpose and goals that accompany the other.

The author limits her focus to U.S.-based aid to Sub-Saharan Africa states that have assumed some preliminary degree of multiparty politics since the third wave of democratization in the 1990s. 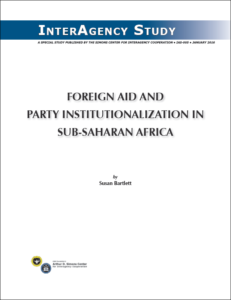