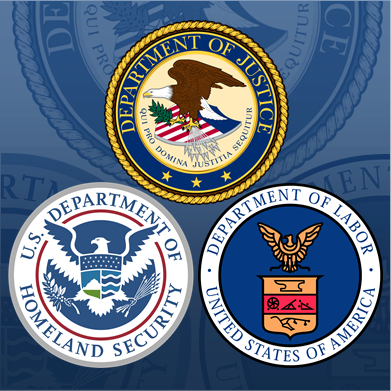 This month the U.S. Departments of Justice, Homeland Security, and Labor announced the selection of six new Anti-Trafficking Coordination Teams (ACTeam).  These teams will lead Phase II of the ACTeam Initiative, an interagency effort to streamline federal criminal investigations and prosecutions of human trafficking offenses that began in 2011.

The new ACTeams will be based in six cities throughout the U.S., and will be led by the local U.S. attorney and the highest-ranking federal investigative agents in the regional field offices of the FBI, U.S. Immigration and Customs Enforcement (ICE), and Department of Labor.

Leaders across U.S. government have spoken highly of the ACTeams’ efforts to fight human trafficking. Attorney General Loretta E. Lynch stated that “Through the ACTeam Initiative, we are harnessing resources across the federal government to ensure that our multi-agency fight against human trafficking is as comprehensive and effective as possible.”  Department of Labor Secretary Thomas Perez agreed with Lynch’s statement, saying that “bringing our respective departments’ collective resources and expertise to bear, is helping us build a whole even greater than the sum of our individual parts.”

Homeland Security Secretary Jeh Johnson also praised the interagency effort, saying that “Our collective efforts are amplified when we work together in furtherance of shared missions like this.” Johnson also mentioned other counter human trafficking efforts, including Homeland Security’s Blue Campaign, which is in its fifth year.

For more information on the ACTeams, please follow the link below.
Departments of Justice, Homeland Security and Labor Announce Selection of Phase II Anti-Trafficking Coordination Teams, Department of Justice