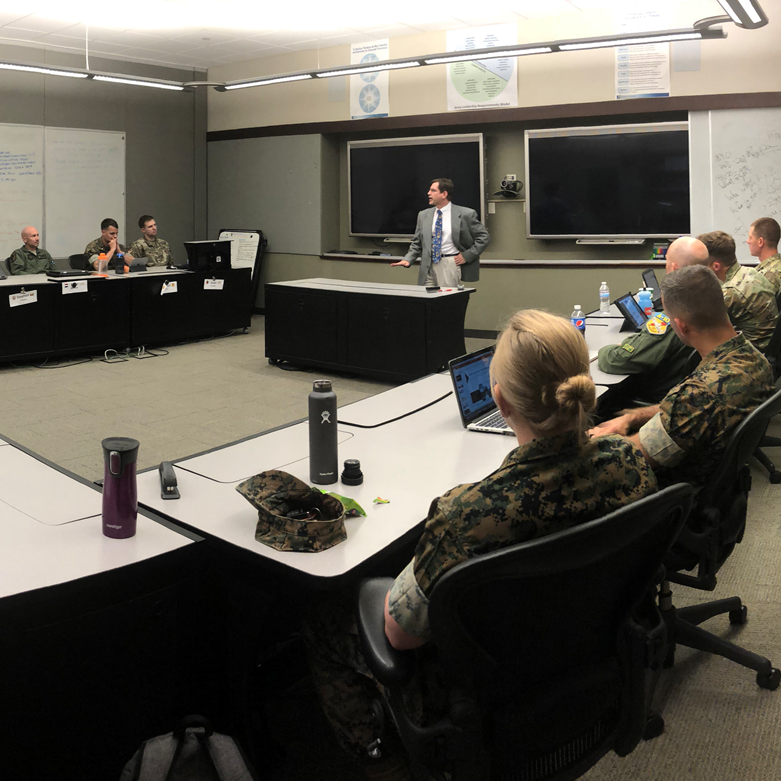 Dr. David A. Graff, professor of history at Kansas State University, recently guest lectured at the U.S. Army Command and General Staff College (CGSC). On May 31, Dr. Graff spoke on Chinese military history at an elective course in the Department of Military History. According to Department of Military History instructor Dr. Geoff Babb, Dr. Graff has previously lectured at the College, sharing his expertise on the subject with several CGSC classes over the years.

Dr. David A. Graff guest lectures on Chinese military history at the U.S. Army Command and General Staff College on May 31.

Graff then opened the lecture to the students, resulting in a long discussion on China-Korea relations from the Han dyansty through the present day.

The Simons Center and the CGSC Foundation are pleased to be able to sponsor speakers that enhance the curriculum of the U.S. Army Command and General Staff College.

David A. Graff is a professor in the Department of History at Kansas State University, and has been the holder of the Richard A. and Greta Bauer Pickett Chair for Exceptional Faculty since 2017. He is the director of Kansas State’s undergraduate program in East Asian Studies and associate director of the graduate program in Security Studies. He received his Ph.D. in East Asian Studies from Princeton University in 1995 and came to Kansas State University in 1998 after holding temporary teaching positions at Southern Methodist University (1994-1995) and Bowdoin College (1995-1997) and spending a year as a visiting scholar at Harvard University (1997-1998).

His research focuses on Chinese military history, especially that of the Tang dynasty (618-907). He is currently completing a translation of what remains of Li Jing’s Art of War, an early Tang military text, and is also working on a study of internal politics and labor relations in the provincial armies of the late Tang period. He is one of the two editors-in-chief of the Journal of Chinese Military History and has also served as secretary of the Chinese Military History Society since its founding in 1998. He teaches all periods of Chinese and Japanese history for undergraduates, as well as world history at both the graduate and undergraduate levels. His graduate teaching has focused on East Asian military history and security issues.