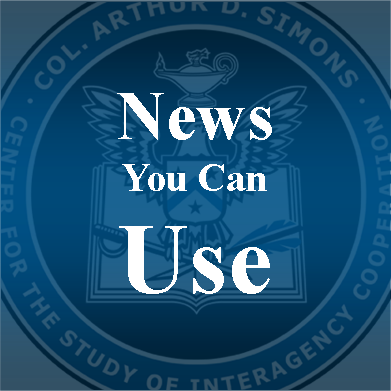 Is South Korea’s Alliance with the United States Worth It?, The New York Times

The New Normal: The Government Must Do Better With Major Disasters, Government Executive

FBI again finds itself unable to unlock a gunman’s cellphone, The Associated Press

Here’s How the US Army Should Arm Itself for New Threats, Defense One

The Middle East Is Nearing an Explosion, The Atlantic

DoD is outpacing itself on cyber, Fifth Domain

How to speed up drug and vaccine development during a public health crisis, Stat

Foreign Service Is Being Depleted at a ‘Dizzying Speed,’ Union Says, Government Executive

The Agency Conducting Your Background Investigations May Change, Government Executive

A Short-Staffed US Air Force Wants Robots to Do More Human Jobs, Defense One