Dr.’s Sean Kalic and Gates Brown presented their lecture on “The Russian Revolutions” as part of the General of the Armies John J. Pershing Great War Centennial Series on Nov. 15, at the Stove Factory Ballroom in downtown Leavenworth. 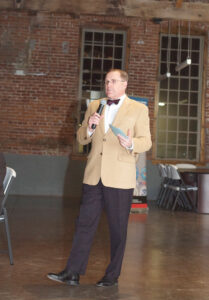 Dr. Sean Kalic discusses the historical background of the Russian Revolutions during the Pershing lecture on Nov. 15.

Kalic and Brown published Russian Revolution of 1917: The Essential Reference Guide, a book just published in September this year. Their presentation was a reflection of their efforts in editing their book. Kalic discussed the historical background leading up to the revolutions and Gates discussed the revolutions themselves. Their presentations highlighted the Russian struggles at home and their effects on the deployed Russian army clearly illustrated the connection between the home front and the front line.

Dr. Sean N. Kalic is a Cold War historian who lectures and publishes widely on topics such as the 1919-1939 interwar period, the Cold War, the post-Cold War security environment, and transnational terrorism. Significant publications include Combating a Modern Hydra: Al Qaeda and the Global War on Terrorism (2005), Thinking about War: Past, Present and Future (2011), and U.S. Presidents and the Militarization of Space, 1946-1967 (2012). This presentation is based on his next publication, The Russian Revolution and Russian Civil War: An Essential Reference (2017). He has presented lectures for the U.S. Naval War College, the Slovenian General Staff, and numerous international conferences. He is a professor in the Department of Military History at the U.S. Army Command and General Staff College where he has taught since 2004.

Dr. Gates Brown is an assistant professor of military history at the U.S. Army Command and General Staff College. His main research focus is the early Cold War period with a focus on U.S. nuclear and defense policy. He earned his doctorate from the University of Kansas. He served in the U.S. Army and deployed in support of Operation Iraqi Freedom.

This was the 13th lecture in the Pershing series, which is intended to foster understanding of WWI during its 100-year commemoration. The CGSC Department of Military History hosts the General of the Armies John J. Pershing Great War Centennial Series with support from the CGSC Foundation. Further, the CGSC Foundation has received support for all Pershing lectures in academic year 2018 from First Command Financial Services in Leavenworth, Kansas, as well as the national headquarters of the Veterans of Foreign Wars (VFW) in Kansas City, Missouri.

The next lecture is the series is set for March 14, 2018. Dr Scott Stephenson will present “The Ludendorff Offensive.”

For more information on the lectures contact contact Dr. Tom Hanson, CGSC’s director of the Department of Military History: email– thomas.e.hanson.civ@mail.mil or phone– 913-684-2056. For other questions, contact Rod Cox, email– rcox@thesimonscenter.org, or Ann Soby, email– ann@cgscf.org, at the CGSC Foundation or phone 913-651-0624.