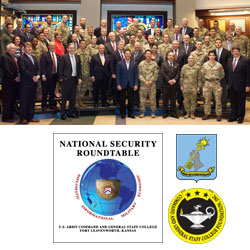 SAMS Deputy Director for Academics Dr. Scott Gorman, at podium, and SAMS Director Col. James Markert, standing at right, provide an overview of the SAMS organization and curriculum on day two of the NSRT program on April 4, 2018.

The first day began with the attendees gathering in the atrium and linking up with their student escorts from the current SAMS class. Foundation President/CEO Doug Tystad provided a brief orientation and the group then moved to the Arnold Conference Room where CGSC Deputy Commandant Brig. Gen. Scott L. Efflandt provided welcoming remarks. After the deputy commandant’s welcome, Jeff LaMoe, CGSC Chief of Staff, provided the roundtable participants with a short history of CGSC and an overview of Army professional education with special emphasis on the College. After LaMoe’s brief, the guest speaker for the evening, retired Ambassador Patrick Moon, former U.S. Ambassador to Bosnia and Herzegovina, spoke to the group about his experiences as a political advisor in the U.S. European Command (EUCOM). He centered his comments around the NSRT’s theme “Anticipating the Future.” The evening ended with a reception in the atrium.

On day two of the program, the group gathered in the SAMS exercise room in Flint Hall where SAMS Director Col. James Markert and Dr. Scott Gorman, deputy director for academics, explained the SAMS organization and curriculum. After the informational briefs and a short question and answer period, the NSRT guests accompanied their student escorts to their classrooms to participate in regularly scheduled classes. 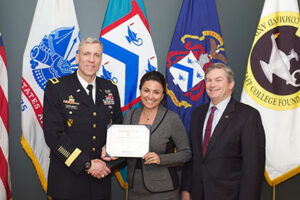 The guests reconvened in the Lewis and Clark Center after a two-hour period in the SAMS classrooms where Tystad provided them with an overview of the CGSC Foundation mission and programs.

The remainder of the day was spent in three panel discussions, the first two of which were focused on “nuclear deterrence” – one from the U.S. perspective with two U.S. military student panel members and the other from the NATO perspective with a SAMS student from Germany and another from the UK making up the panel. The third panel was focused on artificial intelligence in future operations with four U.S. SAMS students making up the panel.

After the panel discussions, Brig. Gen. Efflandt and Foundation Chair Michael Hockley presented each of the attendees with an NSRT completion certificate and copy of the group photo taken earlier in the day.

Special thanks goes to Col. Markert and his staff and the SAMS student volunteers for their work in setting up and hosting this spring NSRT program.

The Foundation also thanks Geiger Ready Mix and Ferguson Hotel Development, LLC, for their sponsorship of the NSRT program.