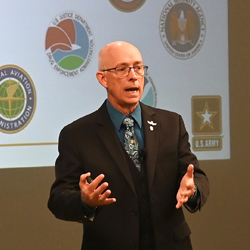 Thomas A. Gray, the U.S. Army Space and Missile Defense Command Liaison to the Combined Arms Center and Army University, addressed a packed room on Sept. 24, 2019, as he spoke about the evolution of space policy, a space force and today’s challenges.

A retired U.S. Army officer, Mr. Gray was one of the first officers selected to be designated as a space operations officer. He served in Army Space Command, the Space and Missile Defense Lab, and the SMDC Directorate of Combat Development. He is qualified as a Level 3 Space Professional of the U.S. Army Civilian Space Cadre, holds the space operations officer designation 3Y, and has earned the U.S. Army Master Space Badge. Mr. Gray holds a bachelor’s from New Hampshire College and earned a master’s from Central Michigan University.

The next lecture in the series is Oct. 10. Mr. Kevin Rousseau, the CGSC Distinguished Chair for National Intelligence Studies, will present a lecture on the Central Intelligence Agency.