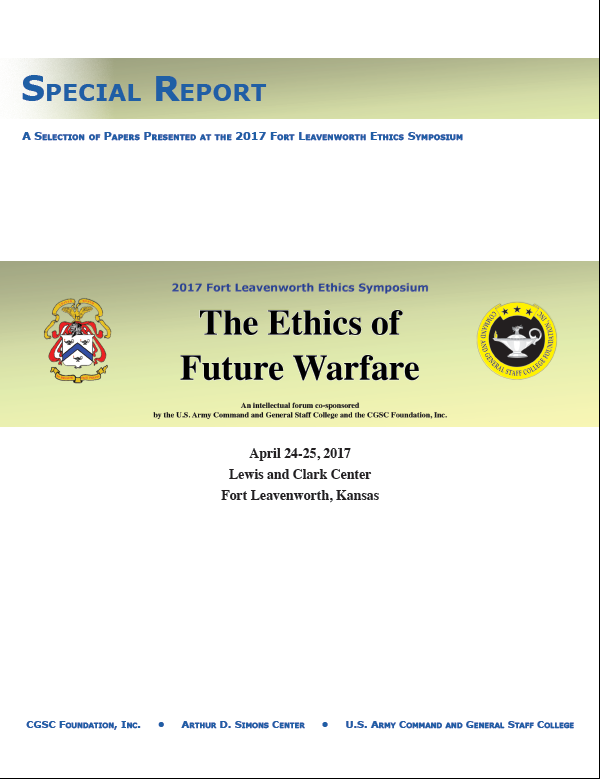 The 2017 Fort Leavenworth Ethics Symposium was conducted April 24-25, 2017, with the theme of “The Ethics of Future Warfare.” The symposium included a variety of guest speakers, panel discussions, and paper presentations.

Twenty papers were accepted for presentation at the symposium. This publication is a collection of seventeen of those papers, published as submitted.

You Can’t Say No: Find a Way to Say Yes
by O. Shawn Cupp and Nils J. Erickson

How Can the United States Army Leverage the Strengths of Three Disparate Generations
to Fight and Win the Nation’s Wars?
by Robert M. Farmer

The Ethics of ISIS: Takfir in Surah 9
by Joshua Gilliam

A Leader’s Duty in Tragedy and Loss
by Francisco M. Hernandez

Jus ad Bellum: A Noble Concept in Need of Renewal
by Prisco Hernandez

The Islamic State’s Tactics in Syria: Role of Social Media in Shifting a Peaceful Arab Spring into Terrorism
by Steve Johnston

Lethal Targeting on the Conventional Battlefield: An Ethical Argument
by Kenneth T. King

Is the Just War Tradition Good Enough as a Framework for Future War?
by Bruce Roeder