Special Report: The Impact of Diverse Worldviews on Military Conflict 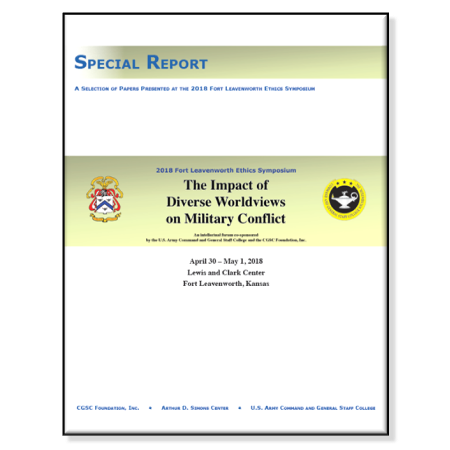 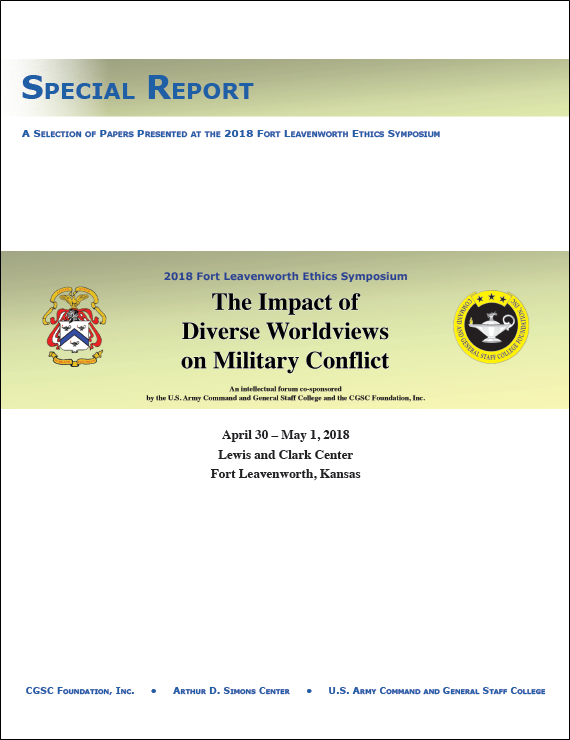 The 2018 Fort Leavenworth Ethics Symposium was conducted April 30-May 1, 2018, with the theme of “The Impact of Diverse Worldviews on Military Conflict.” The symposium included a variety of guest speakers, panel discussions, and paper presentations.

Over thirty papers were accepted for presentation at the symposium. This publication is a collection of nineteen of those papers, published as largely as submitted.

Finding Common Ground: The Ethics of Anthropology and Military Cooperation
by Joel Evans

Understanding the Causes of War: Analysis and Recommendations on Self-Development for Military Professionals
by Christopher J. Heatherly and Ian Melendez

First to Fight for the “Right”: The Ethical Dilemma Inherent within the Multi-Domain Battle Concept
by Bryan Hedrick

Reciprocity and the Search for a Guiding Principle in Cross-Cultural Relations: A Philosophical Essay
by Prisco R. Hernandez, Ph.D.

What Were You Thinking? Discovering your Moral Philosophy Using the Forensic Approach
by Richard A. McConnell, Ph.D. and Evan Westgate

The Ethical Body, Selecthics and the Should, Would, Could Trilemma
by Brandt A. Murphy

“Reflecting the Best in Us”: Traditional Just War Principles as a Framework for Building Character and Maintaining Trust
by Kenneth L. Sampson

Ethics of Fiscal Responsibility in Overseas Contingency Operations Funding: Appropriate or Mismanagement?
by Greg A. Suguitan and O. Shawn Cupp

Transparency of Military Activities – An Aspect of Conflict in Russia and Its “Near Abroad”
by Mark R. Wilcox

The Need for “Objective E”
by Robert G. Young