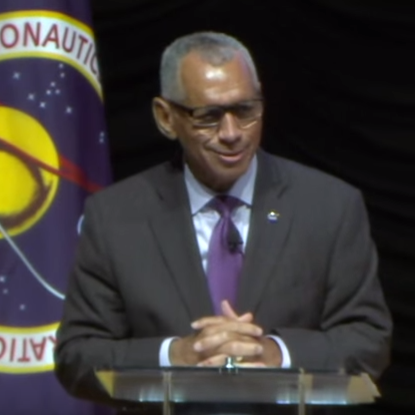 On September 17, U.S. Agency for International Development (USAID) and National Aeronautics and Space Administration (NASA) officials met in Washington, D.C. for a town hall on a joint USAID and NASA venture to improve environmental decision-making abilities for officials in developing countries. USAID Associate Administrator Eric Postel and NASA Administrator Charles Bolder were joined by two astronauts who had recently returned from the International Space Station – Terry Virts of NASA and Samantha Cristoforetti of the European Space Agency.

The officials and astronauts discussed the SERVIR program, which is a joint venture between the agencies that provides state-of-the-art, satellite-based Earth monitoring, imaging and mapping data, geospatial information, and other products to help manage challenges in the areas of food security, water resources, land use change, and natural disasters. SERVIR has already began activities in more than 30 countries, developed over 40 custom tools, collaborated with over 200 institutions, and trained more than 1,800 individuals, improving the capacity to develop local solutions.

Dan Irwin, Director of the NASA SERVIR Coordination Office at the Marshall Space Flight Center in Huntsville, Alabama, spoke of the USAID-NASA partnership in a panel discussion, saying the two agencies joined together to work on SERVIR because of “the unbelievable synergies that we could develop as two very different but complementary agencies.” He went on to say that “As NASA develops new Earth-observing capabilities and USAID advances food security and other related issues, we’re really bringing to bear the best assets of both agencies.”

During a USAID town hall on September 17, USAID Associate Administrator Eric Postel,
NASA Administrator Charlie Bolden, and two astronauts who recently returned from a mission aboard
the International Space Station discussed the importance of the SERVIR project which will help
improve environmental decision-making abilities for officials in developing countries.