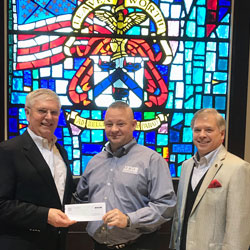 On Jan. 10, Lynn W. Rolf, III, director of programs for the Veterans of Foreign Wars, visited Fort Leavenworth and the CGSC Foundation to present a donation to the Foundation to establish an endowment for the General George C. Marshall Award. The award is presented to the distinguished U.S. graduate of the Command and General Staff Officers Course during ceremonies each June. 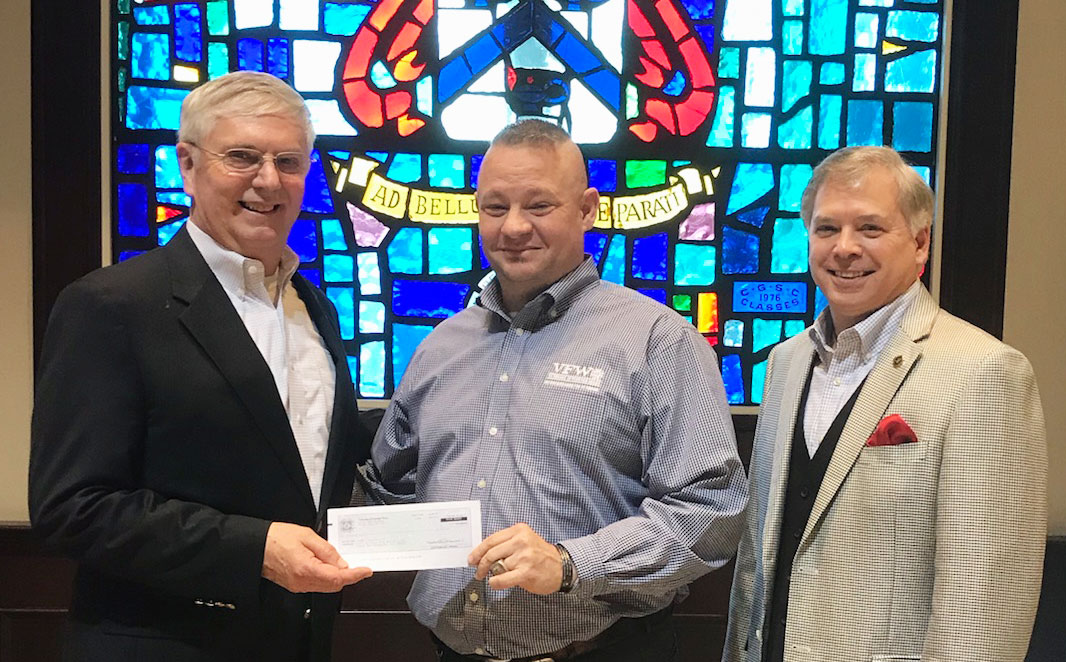 VFW Director of Programs Lynn Rolf III, center, presents a donation to CGSC Foundation CEO Doug Tystad, left, and the Foundation’s Simons Center Program Director Rod Cox, right, in the atrium of the Lewis and Clark Center on Jan. 10. VFW’s donation will endow CGSC’s General George C. Marshall Award which is presented to the top U.S. graduate of the Command and General Staff Officers Course during ceremonies each June.

“The VFW stands behind our warriors and anyway we can step up and show support of their professional development we are 100 percent all in,” said Rolf. “Our future military leaders are going to define the country, so this small gesture is the least the Veterans of Foreign Wars can do.”

“The Foundation sponsors more than 60 percent of all the academic awards for each SAMS and CGSC graduating class, in addition to recognition for the CGSC Educators of the Year and recognition for Emeritus Faculty on their retirement,” said Foundation CEO Doug Tystad. “With the VFW coming on board to help establish this endowment for the Marshall award, we can continue to recognize academic excellence.”

Tystad added that the CGSC Foundation will manage the endowment which will fund the award in perpetuity.

This endowment joins other endowed awards managed by the Foundation, including the General Dwight D. Eisenhower Award for the top International Military Student graduate endowed in the memory of David Beaham; the Lieutenant Colonel Boyd McCanna “Mac” Harris Leadership Award for outstanding leadership endowed by Gary and Moira Sinise in Lt. Col. Harris’ memory; the Major General Hans Schlupp Award for International Military Students endowed by the CGSC Class of 1978 in honor of their classmate; and the LTC Ronald C. Ward Distinguished Special Operations Forces (SOF) Student Award for the distinguished SOF graduate endowed by the Ward family.