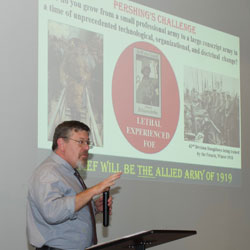 On August 23, 2018, Dr. Richard S. Faulkner, William A. Stofft Professor and Chair of Military History at the U.S. Army Command and General Staff College, presented “Into the Crucible: The AEF in Battle September-November 1918,” at the Stove Factory Ballroom in downtown Leavenworth, Kansas.

In his presentation, Faulkner explored the challenges that the American Expeditionary Forces (AEF) faced in conducting large-scale combat operations from September to November 1918, with a primary focus on the Meuse-Argonne Offensive, the United States’ greatest contribution to the Allied victory in the war, and an event that holds the distinction of being the largest and bloodiest campaign in the nation’s history.

Dr. Richard S. Faulkner presented “Into the Crucible: The AEF in Battle September-November 1918″ on August 23.

Dr. Richard S. Faulkner served 23 years in the U.S. Army and commanded a tank company in the 1st Armored Division during Operation Desert Storm. Faulkner is the author of The School of Hard Knocks: Combat Leadership in the American Expeditionary Forces (Texas A&M Press, 2012), which was the recipient of the Society for Military History’s 2013 “Distinguished Book Award.” His second book, Pershing’s Crusaders: The American Soldier in World War I (University Press of Kansas, 2017) received the World War I Association’s 2017 “Norman B. Tomlinson, Jr. Prize” for the best work of history in English on World War One, the Organization of American Historians’ 2017 “Richard W. Leopold Prize,” and the Army Historical Foundation’s 2017 “Excellence in U.S. Army History Book Award.”

Faulkner’s lecture was the 16th in the General of the Armies John J. Pershing Great War Centennial Series hosted by the CGSC Department of Military History and supported by the CGSC Foundation, and the first Pershing Lecture to be held in academic year 2019. The CGSC Foundation has received support for all Pershing lectures in academic year 2019 from First Command Financial Services in Leavenworth, Kansas.

All lectures in the series are free and open to the public. For more information contact Col. (Ret.) Rod Cox, email– rcox@thesimonscenter.org, or phone 913-82-7244.

Dr. Faulkner presented this lecture again on Aug. 29 at 6:30 p.m. at the National WWI Museum and Memorial. See the video of his full lecture below.