In early August the Center for a New American Security (CNAS) released a report examining port recovery efforts during Hurricane Sandy. The report details the public and private sector collaboration that successfully prepared for recovery efforts for the October 2012 storm.

The Marine Transportation System Recovery Unit (MTS-RU), a group of public and private sector representatives with the common goal of restoring the Marine Transportation System in the event of a port-wide disruption, is credited as being crucial to the success of the recovery efforts. The MTS-RU, which included representatives from the Coast Guard, National Oceanic and Atmospheric Administration, U.S. Army Corps of Engineers, Port Authority of New York and New Jersey, and others, was activated two days prior to the storm in preparation of recovery efforts.

CNAS’s report goes on to detail the extensive damage done to port-wide facilities, fuel and power shortages, and other ways the storm impacted the area. The report also refers to MTS-RU as the “backbone of port recover efforts,” citing the existing relationships and trust between the public and private sector representatives as vital to the success of recovery efforts.

The report concludes with recommendations that will help better prepare for any future storms. Among these recommendations is the creation of an interagency port resiliency task force to “facilitate a national strategic policy discussion about port resilience planning.” Task force members would include representatives from the Departments of Defense, Homeland Security, Transportation, Energy, and Commerce, among others. 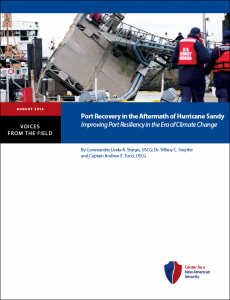 For more information about the CNAS report, please follow the link below.
Port Recovery in the Aftermath of Hurricane Sandy: Improving Port Resiliency in the Era of Climate Change, Center for a New American Security