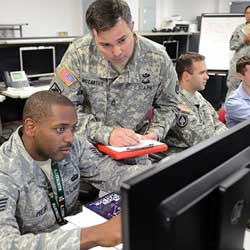 In June, U.S. Cyber Command, the Department of Homeland Security (DHS), and the Federal Bureau of Investigation (FBI) hosted a 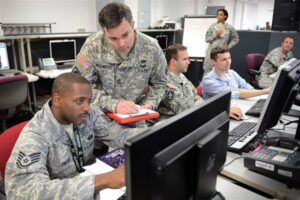 The exercise took place from June 8-26, with over 1,000 participants rehearsing a response to a cyberattack on U.S. critical infrastructure. While touring exercise areas, U.S. Cyber Command Commander Navy Adm. Michael S. Rogers described the purpose of Cyber Guard, saying it is “designed to exercise the interface between the Department of Defense — the active and Reserve and Guard components — that are focused on the cyber mission, and to partner with other elements of the U.S. government as well as state and local authorities.” Rogers also said Cyber Guard leveraged and used the capabilities from the private sector with capabilities of the federal government within DoD, FBI, and DHS.

The Cyber Guard exercise scenario involved a major earthquake in Southern California, followed by a series of cyberattacks that disrupt electrical power aong the West and East Coasts. The exercise also incorporated the intense media interest that would result from such events, and included oil and gas pipeline disruptions, power outages, ATM failures, food shortages, and other problems that would arise after a cyberattack.