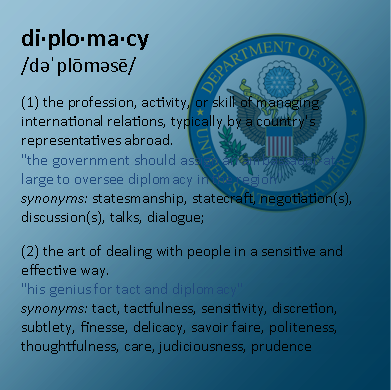 He ordered another bottle … in honor of a career so comfortable that it is called
The Career and a ministerial department so superior that it is called The Department.
“Les Ambassades”, Roger Peyrefitte

Most countries provide professional education for their diplomats and some operate establishments specifically for that purpose. Few of us would claim that the U.S. government and the Department of State provides equivalent experience with any degree of seriousness or comprehensiveness. Our Foreign Service Institute, for all its virtues and fond memories, is essentially a training, not an educational, institution. However there are signs of growing interest in diplomatic education, expressed for example in an American Foreign Service Association paper recently submitted to the Quadrennial Diplomacy and Development Report drafting team. If pursued we may yet see a serious program of professional education put in place for America’s professional diplomats.

To do so, however, will require us to get some agreement on terms and definition. There is much confusion in the popular as well as professional minds about the subject of diplomacy. It has been famously noted that English is a tricky language, requiring a good deal of care to ensure that what is said is what is meant. Even at the level of single words, confusion can occur as words often have multiple meanings. One good example is the word “diplomacy” which, in addition to its formal reference to a specialized activity of governments, has entered into common parlance to denote personal qualities involving pleasing manners.

However even in the context of its original meaning, there is much confusion between several terms which many people think are synonyms, but aren’t: foreign affairs, foreign policy, and diplomacy. Using some fairly standard dictionary definitions, we find that;

Meanwhile, diplomacy is defined as “the art and practice of conducting negotiations between nations” in order to implement those polices and pursue those interests.

So we have a nice progression, from the general subject (foreign affairs) to a specific manifestation (foreign policy) to implementation (diplomacy).

The meaning of diplomacy is further complicated as even in its purest sense, the word has two general meanings: in the policy sense, that is “ a government’s diplomacy”; or the operational sense, the conduct of business between and among governments, conducted through bureaucratic institutions and processes. The former is loosely intended to refer to a country’s “foreign policy”, hence the confusion, while latter is the activity of a country’s foreign policy bureaucracy.

Diplomacy is the instrument of communication, not the message communicated. George Kennan, who thought about his profession as seriously as he did about foreign affairs and foreign policy, noted that “This is the classic function of diplomacy: to effect the communications between one’s own government and other governments or individuals abroad, and to do this with maximum accuracy, imagination, tact, and good sense.” In other words the medium is not the message. Still, the widespread confusion between the two obliged the legendary academic student of international politics, Hans Morgenthau, to comment that there was a common “confusion of functions between the foreign office and the diplomatic representative”.

But the medium must have a corporal form. In fact it has two. The first is the activity itself, when officials—from Presidents to Third Secretaries and the occasional “Special Representative”—practice diplomacy, that is, conduct official communications between governments.

The second form is an established institution. Even the Internet operating through the Cloud requires some form of instrument at either end of a conversation. For diplomacy, that physical instrument is a foreign service (“the diplomatic and consular personnel of a country’s foreign office.”) and in the case of the United States, the Foreign Service of the United States—a government service of diplomatic and consular staff established by law as part of the Executive Branch.

This body of officials is an instrument of the government, one of the tools in the foreign policy toolbox, not an independent force. Most countries try to organize that instrument in the form of a professional cadre, recruited, trained, and educated for their task as representatives and interpreters of their country’s foreign policy. However, diplomacy has never been a popular, or even well understood, activity in most modern democratic countries. After the remarkable performance of Benjamin Franklin in Paris, the U.S. proceeded to conduct its diplomacy with an ad hoc mixture of personalities chosen largely by means of the political tradition of the “spoils system” through the 19th century. By the end of the 19th century however, the reform movement in the U.S. accepted the necessity of a professional foreign service as important to the country’s independent existence.

That awareness produced the Rogers Act of 1924, which created the professional Foreign Service of the United States. Changes and reforms were introduced over the years of the 20th Century as the country moved from its traditional policy of hemispheric isolationism to world leadership. The current organization and mission of the Foreign Service was mandated by Congress in the Foreign Service Act of 1980 which clearly described the new government service:

The Congress finds that—
(1) a career foreign service, characterized by excellence and professionalism, is essential in the national interest to assist the President and the Secretary of State in conducting the foreign affairs of the United States;

(2) the scope and complexity of the foreign affairs of the Nation have heightened the need for a professional foreign service that will serve the foreign affairs interests of the United States in an integrated fashion and that can provide a resource of qualified personnel for the President, the Secretary of State, and the agencies concerned with foreign affairs.

So perhaps the problem of definition is not really that difficult. We only need to turn to the relevant legislation and listen to our elected leaders. They say the business of the Foreign Service is to “conduct diplomacy on behalf of the United States” and to “serve the foreign affairs interests of the U.S.” If Congress can understand this clear distinction, why can’t everyone else?

One thought on “Defining diplomacy”

One thought on “Defining diplomacy”