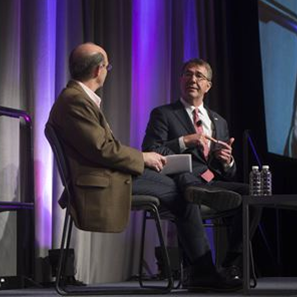 On March 2, Secretary of Defense Ash Carter spoke at the RSA Conference in San Francisco. The RSA Conference was part of Secretary Carter’s West Coast trip to discuss technology and cybersecurity with the nation’s top innovative industries.

At the conference, Carter engaged in a “fireside chat” with moderator Ted Schlein, a partner at Silicon Valley’s venture-capital company Kleiner, Perkins, Caufield & Byers. During their talk, Carter discussed innovation programs between DoD and the private sector, the department’s innovation initiatives, data security, cybersecurity and the accelerated campaign to counter the Islamic State of Iraq and the Levant.

In his remarks, Carter encouraged collaborative endeavors between the Department of Defense and the private sector, saying “Reach out to us… whether you’re looking at problems and offering us a solution, whether you’re offering your own commitment for a year, six months — [there are] lots of avenues for you to connect with us that you probably haven’t thought of, and we’re trying to think more about every day.”

“Let’s be collaborative. Let’s be technical. Let’s recognize that this is not one case and one problem. It’s many, and [let’s] innovate our way together to the answer,” declared Carter while speaking about the importance of cooperation between the government and private sector in strengthening U.S. cybersecurity. 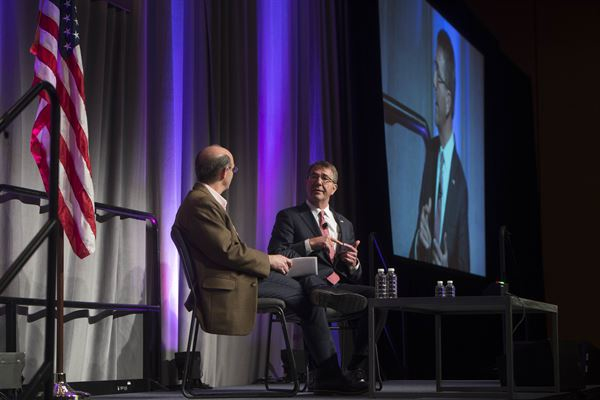