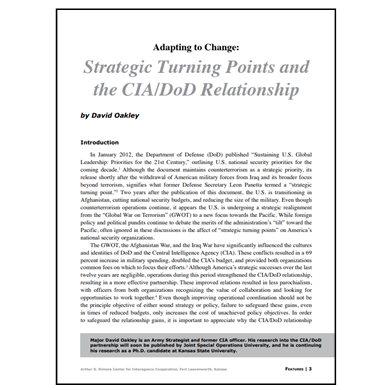 Adapting to Change: Strategic Turning Points and the CIA/DoD Relationship
by David Oakley 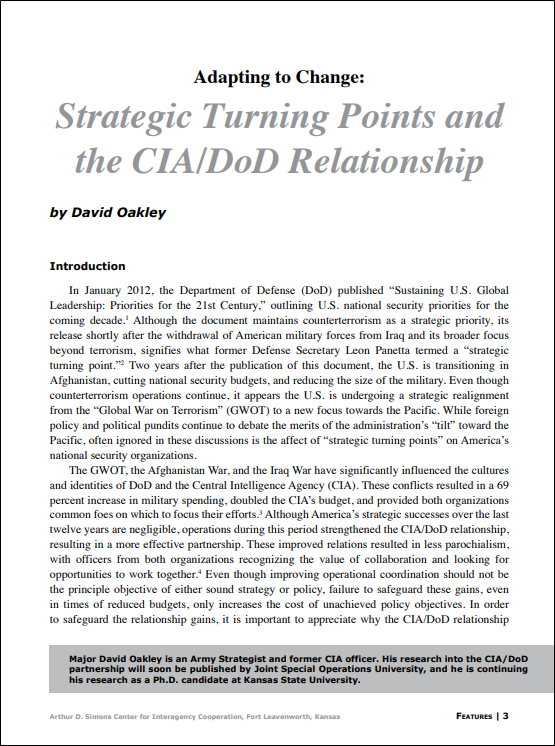 In January 2012, the Department of Defense (DoD) published “Sustaining U.S. Global Leadership: Priorities for the 21st Century,” outlining U.S. national security priorities for the coming decade. Although the document maintains counterterrorism as a strategic priority, its release shortly after the withdrawal of American military forces from Iraq and its broader focus beyond terrorism, signifies what former Defense Secretary Leon Panetta termed a “strategic turning point.” Two years after the publication of this document, the U.S. is transitioning in Afghanistan, cutting national security budgets, and reducing the size of the military. Even though counterterrorism operations continue, it appears the U.S. is undergoing a strategic realignment from the “Global War on Terrorism” (GWOT) to a new focus towards the Pacific. While foreign policy and political pundits continue to debate the merits of the administration’s “tilt” toward the Pacific, often ignored in these discussions is the affect of “strategic turning points” on America’s national security organizations.

The GWOT, the Afghanistan War, and the Iraq War have significantly influenced the cultures and identities of DoD and the Central Intelligence Agency (CIA). These conflicts resulted in a 69 percent increase in military spending, doubled the CIA’s budget, and provided both organizations common foes on which to focus their efforts. Although America’s strategic successes over the last twelve years are negligible, operations during this period strengthened the CIA/DoD relationship, resulting in a more effective partnership. These improved relations resulted in less parochialism, with officers from both organizations recognizing the value of collaboration and looking for opportunities to work together. Even though improving operational coordination should not be the principle objective of either sound strategy or policy, failure to safeguard these gains, even in times of reduced budgets, only increases the cost of unachieved policy objectives. In order to safeguard the relationship gains, it is important to appreciate why the CIA/DoD relationship evolved to its current state and anticipate how changing strategic conditions might affect it in
the future...