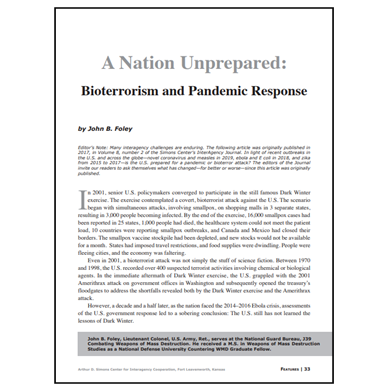 A Nation Unprepared: Bioterrorism and Pandemic Response
by John B. Foley 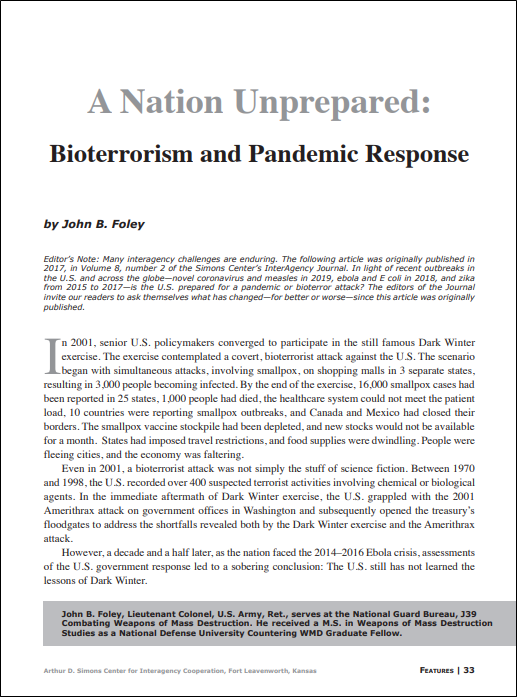 In 2001, senior U.S. policymakers converged to participate in the still famous Dark Winter exercise. The exercise contemplated a covert, bioterrorist attack against the U.S. The scenario began with simultaneous attacks, involving smallpox, on shopping malls in 3 separate states, resulting in 3,000 people becoming infected. By the end of the exercise, 16,000 smallpox cases had been reported in 25 states, 1,000 people had died, the healthcare system could not meet the patient load, 10 countries were reporting smallpox outbreaks, and Canada and Mexico had closed their borders. The smallpox vaccine stockpile had been depleted, and new stocks would not be available for a month. States had imposed travel restrictions, and food supplies were dwindling. People were fleeing cities, and the economy was faltering.

Even in 2001, a bioterrorist attack was not simply the stuff of science fiction. Between 1970 and 1998, the U.S. recorded over 400 suspected terrorist activities involving chemical or biological agents. In the immediate aftermath of Dark Winter exercise, the U.S. grappled with the 2001 Amerithrax attack on government offices in Washington and subsequently opened the treasury’s floodgates to address the shortfalls revealed both by the Dark Winter exercise and the Amerithrax attack.

However, a decade and a half later, as the nation faced the 2014–2016 Ebola crisis, assessments of the U.S. government response led to a sobering conclusion: The U.S. still has not learned the lessons of Dark Winter….

Editor’s Note: Many interagency challenges are enduring. The following article was originally published in 2017, in Volume 8, number 2 of the Simons Center’s InterAgency Journal. In light of recent outbreaks in the U.S. and across the globe—novel coronavirus and measles in 2019, ebola and E coli in 2018, and zika from 2015 to 2017—is the U.S. prepared for a pandemic or bioterror attack? The editors of the Journal invite our readers to ask themselves what has changed—for better or worse—since this article was originally published.