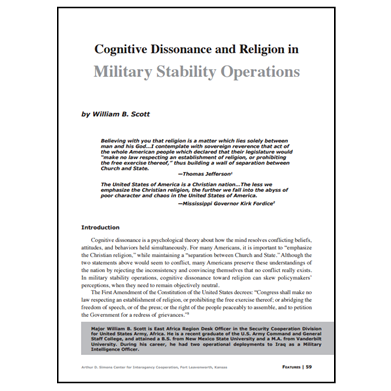 Cognitive Dissonance and Religion in Military Stability Operations
by William B. Scott 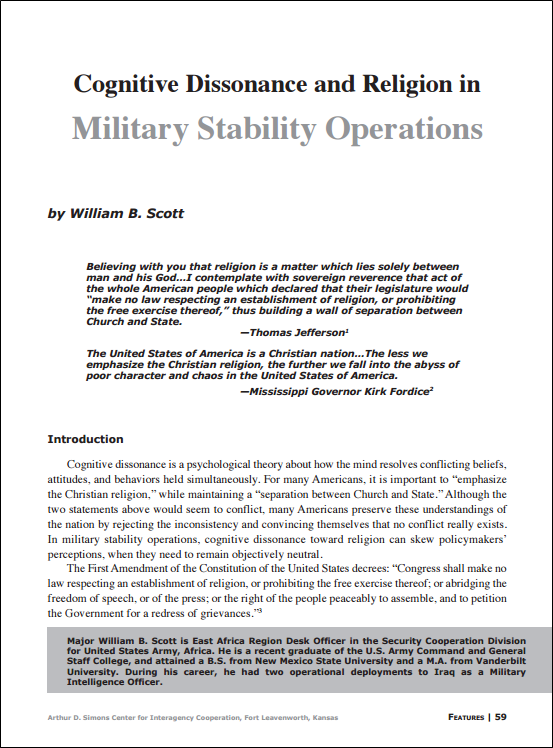 Cognitive dissonance is a psychological theory about how the mind resolves conflicting beliefs, attitudes, and behaviors held simultaneously. For many Americans, it is important to “emphasize the Christian religion,” while maintaining a “separation between Church and State.” Although the two statements above would seem to conflict, many Americans preserve these understandings of the nation by rejecting the inconsistency and convincing themselves that no conflict really exists. In military stability operations, cognitive dissonance toward religion can skew policymakers’ perceptions, when they need to remain objectively neutral.

The First Amendment of the Constitution of the United States decrees: “Congress shall make no law respecting an establishment of religion, or prohibiting the free exercise thereof; or abridging the freedom of speech, or of the press; or the right of the people peaceably to assemble, and to petition the Government for a redress of grievances.”

The Establishment Clause refers to the phrase “no laws respecting an establishment of religion, or prohibiting the free exercise thereof” of this amendment. This clause means that Congress or any government body, such as the military, cannot institute a national religion or prefer one religion over another. The intent of this article is to highlight the importance of acknowledging widespread Christianity in all aspects of life due to its effects on military stability operations...