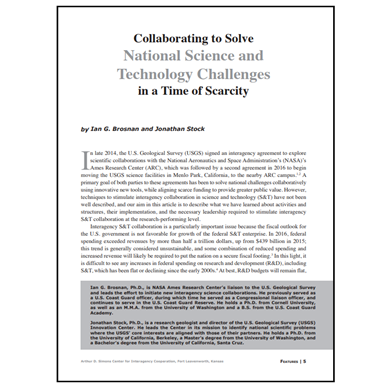 Collaborating to Solve National Science and Technology Challenges in a Time of Scarcity
by Ian G. Brosnan and Jonathan Stock 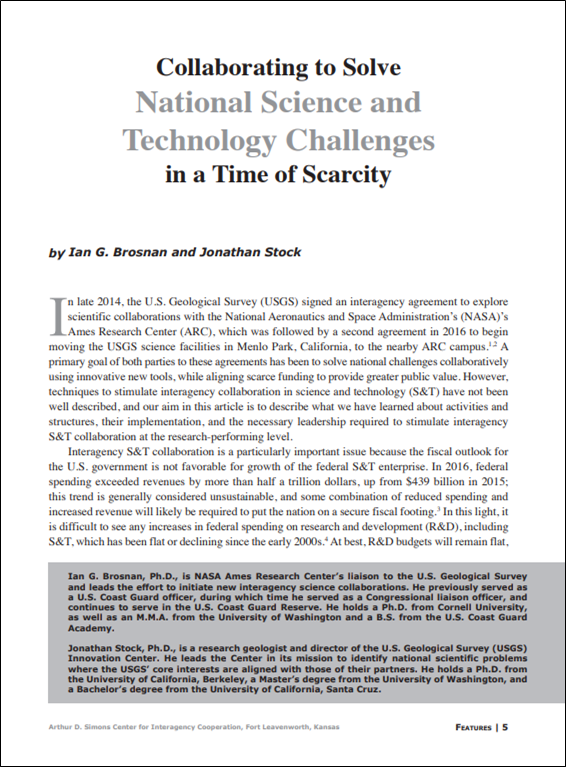 In late 2014, the U.S. Geological Survey (USGS) signed an interagency agreement to explore scientific collaborations with the National Aeronautics and Space Administration’s (NASA)’s Ames Research Center (ARC), which was followed by a second agreement in 2016 to begin moving the USGS science facilities in Menlo Park, California, to the nearby ARC campus. A primary goal of both parties to these agreements has been to solve national challenges collaboratively using innovative new tools, while aligning scarce funding to provide greater public value. However, techniques to stimulate interagency collaboration in science and technology (S&T) have not been well described, and our aim in this article is to describe what we have learned about activities and structures, their implementation, and the necessary leadership required to stimulate interagency S&T collaboration at the research-performing level.

Interagency S&T collaboration is a particularly important issue because the fiscal outlook for the U.S. government is not favorable for growth of the federal S&T enterprise. In 2016, federal spending exceeded revenues by more than half a trillion dollars, up from $439 billion in 2015; this trend is generally considered unsustainable, and some combination of reduced spending and
increased revenue will likely be required to put the nation on a secure fiscal footing. In this light, it is difficult to see any increases in federal spending on research and development (R&D), including S&T, which has been flat or declining since the early 2000s. At best, R&D budgets will remain flat, and alternative approaches will be needed if the S&T enterprise is to deliver on its full potential.