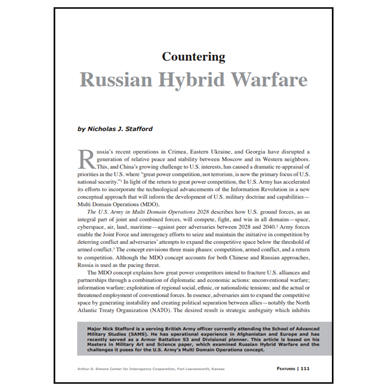 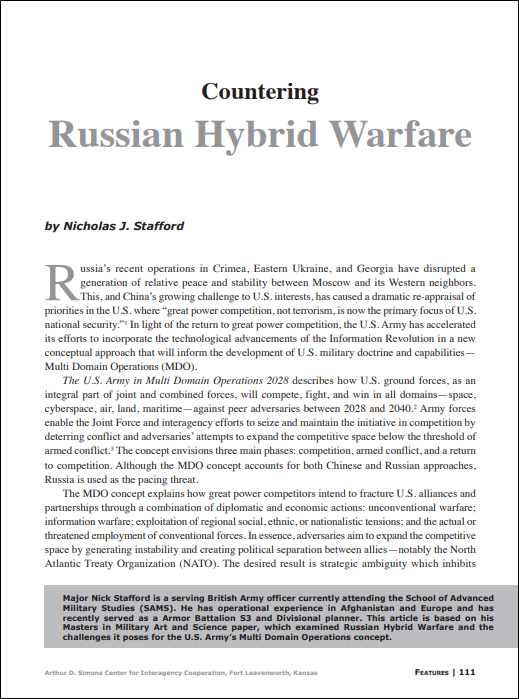 Russia’s recent operations in Crimea, Eastern Ukraine, and Georgia have disrupted a generation of relative peace and stability between Moscow and its Western neighbors. This, and China’s growing challenge to U.S. interests, has caused a dramatic re-appraisal of priorities in the U.S. where “great power competition, not terrorism, is now the primary focus of U.S. national security.” In light of the return to great power competition, the U.S. Army has accelerated its efforts to incorporate the technological advancements of the Information Revolution in a new conceptual approach that will inform the development of U.S. military doctrine and capabilities—Multi Domain Operations (MDO).

The U.S. Army in Multi Domain Operations 2028 describes how U.S. ground forces, as an integral part of joint and combined forces, will compete, fight, and win in all domains—space, cyberspace, air, land, maritime—against peer adversaries between 2028 and 2040. Army forces enable the Joint Force and interagency efforts to seize and maintain the initiative in competition by deterring conflict and adversaries’ attempts to expand the competitive space below the threshold of armed conflict. The concept envisions three main phases: competition, armed conflict, and a return to competition. Although the MDO concept accounts for both Chinese and Russian approaches, Russia is used as the pacing threat.

The MDO concept explains how great power competitors intend to fracture U.S. alliances and partnerships through a combination of diplomatic and economic actions…