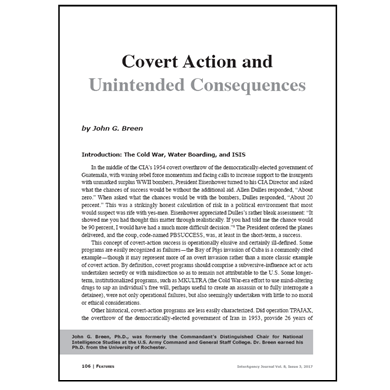 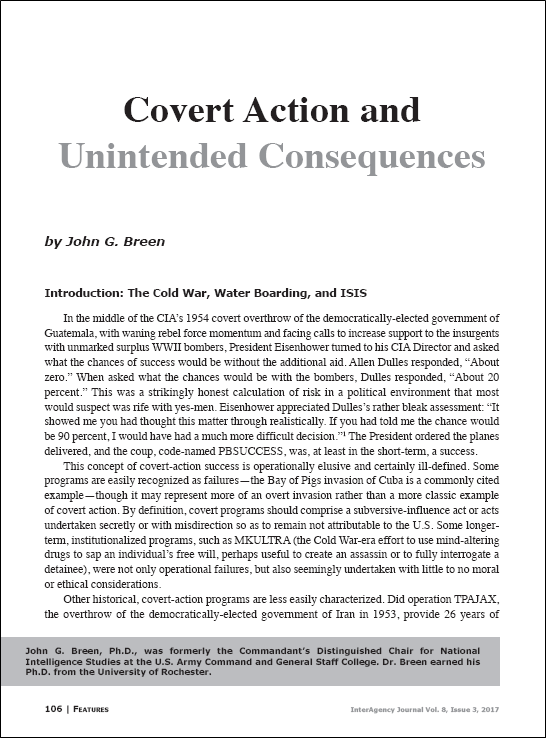 In the middle of the CIA’s 1954 covert overthrow of the democratically-elected government of Guatemala, with waning rebel force momentum and facing calls to increase support to the insurgents with unmarked surplus WWII bombers, President Eisenhower turned to his CIA Director and asked what the chances of success would be without the additional aid. Allen Dulles responded, “About zero.” When asked what the chances would be with the bombers, Dulles responded, “About 20 percent.” This was a strikingly honest calculation of risk in a political environment that most would suspect was rife with yes-men. Eisenhower appreciated Dulles’s rather bleak assessment: “It showed me you had thought this matter through realistically. If you had told me the chance would be 90 percent, I would have had a much more difficult decision.” The President ordered the planes delivered, and the coup, code-named PBSUCCESS, was, at least in the short-term, a success.

This concept of covert-action success is operationally elusive and certainly ill-defined. Some programs are easily recognized as failures—the Bay of Pigs invasion of Cuba is a commonly cited example—though it may represent more of an overt invasion rather than a more classic example of covert action. By definition, covert programs should comprise a subversive-influence act or acts undertaken secretly or with misdirection so as to remain not attributable to the U.S. Some longer-term, institutionalized programs, such as MKULTRA (the Cold War-era effort to use mind-altering drugs to sap an individual’s free will, perhaps useful to create an assassin or to fully interrogate a detainee), were not only operational failures, but also seemingly undertaken with little to no moral or ethical considerations…