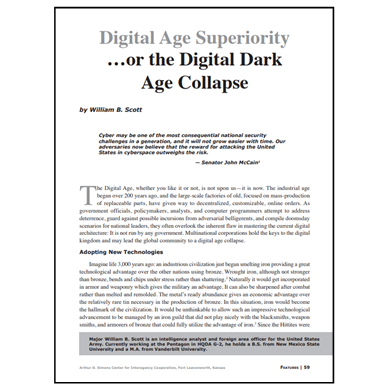 Digital Age Superiority …or the Digital Dark Age Collapse
by William B. Scott 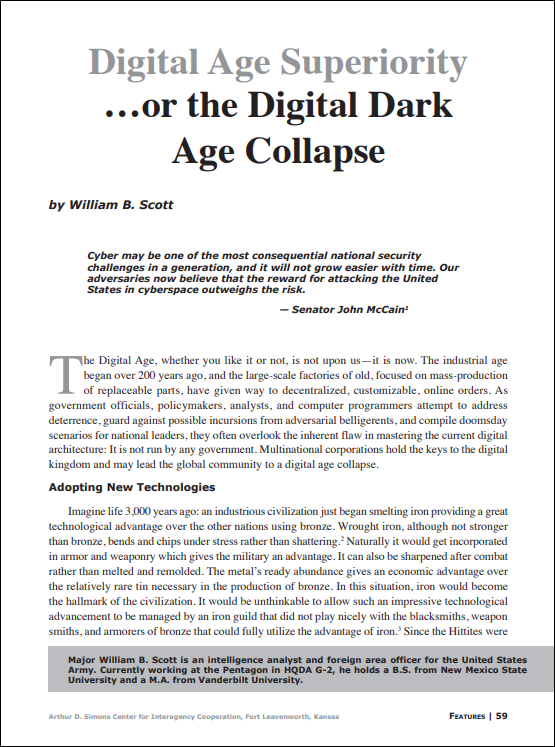 Cyber may be one of the most consequential national security challenges in a generation, and it will not grow easier with time. Our adversaries now believe that the reward for attacking the United States in cyberspace outweighs the risk.
— Senator John McCain

The Digital Age, whether you like it or not, is not upon us—it is now. The industrial age began over 200 years ago, and the large-scale factories of old, focused on mass-production of replaceable parts, have given way to decentralized, customizable, online orders. As government officials, policymakers, analysts, and computer programmers attempt to address deterrence, guard against possible incursions from adversarial belligerents, and compile doomsday scenarios for national leaders, they often overlook the inherent flaw in mastering the current digital architecture: It is not run by any government. Multinational corporations hold the keys to the digital kingdom and may lead the global community to a digital age collapse.

Imagine life 3,000 years ago: an industrious civilization just began smelting iron providing a great technological advantage over the other nations using bronze. Wrought iron, although not stronger than bronze, bends and chips under stress rather than shattering. Naturally it would get incorporated in armor and weaponry which gives the military an advantage. It can also be sharpened after combat rather than melted and remolded. The metal’s ready abundance gives an economic advantage over the relatively rare tin necessary in the production of bronze. In this situation, iron would become the hallmark of the civilization. It would be unthinkable to allow such an impressive technological advancement to be managed by an iron guild that did not play nicely with the blacksmiths, weapon smiths, and armorers of bronze that could fully utilize the advantage of iron…