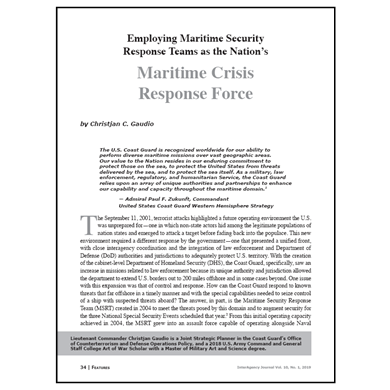 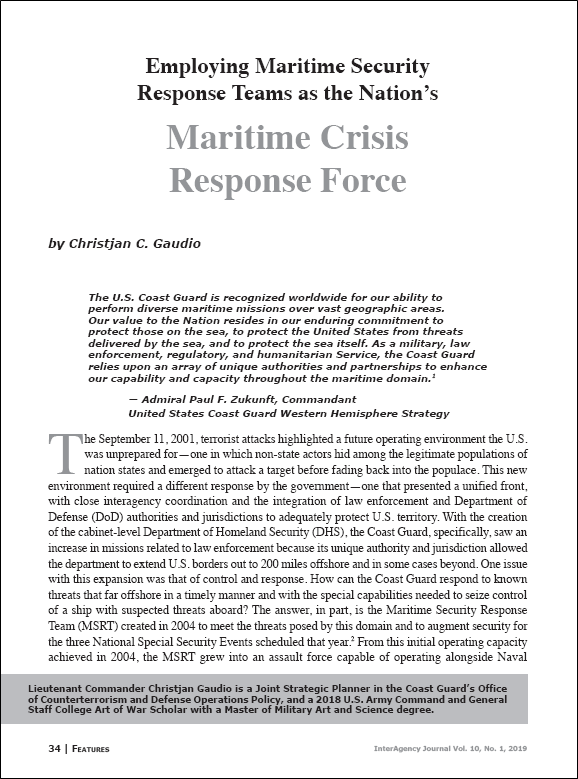 The U.S. Coast Guard is recognized worldwide for our ability to perform diverse maritime missions over vast geographic areas. Our value to the Nation resides in our enduring commitment to protect those on the sea, to protect the United States from threats delivered by the sea, and to protect the sea itself. As a military, law enforcement, regulatory, and humanitarian Service, the Coast Guard relies upon an array of unique authorities and partnerships to enhance our capability and capacity throughout the maritime domain.

The September 11, 2001, terrorist attacks highlighted a future operating environment the U.S. was unprepared for—one in which non-state actors hid among the legitimate populations of nation states and emerged to attack a target before fading back into the populace. This new environment required a different response by the government—one that presented a unified front, with close interagency coordination and the integration of law enforcement and Department of Defense (DoD) authorities and jurisdictions to adequately protect U.S. territory. With the creation of the cabinet-level Department of Homeland Security (DHS), the Coast Guard, specifically, saw an increase in missions related to law enforcement because its unique authority and jurisdiction allowed the department to extend U.S. borders out to 200 miles offshore and in some cases beyond. One issue with this expansion was that of control and response. How can the Coast Guard respond to known threats that far offshore in a timely manner and with the special capabilities needed to seize control of a ship with suspected threats aboard? The answer, in part, is the Maritime Security Response Team (MSRT) created in 2004 to meet the threats posed by this domain and to augment security for the three National Special Security Events scheduled that year…