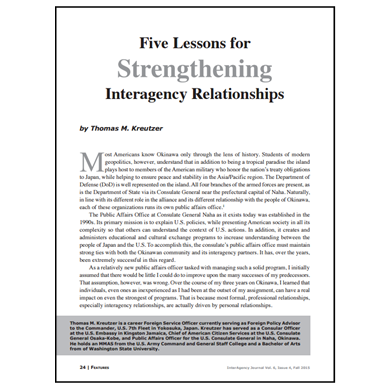 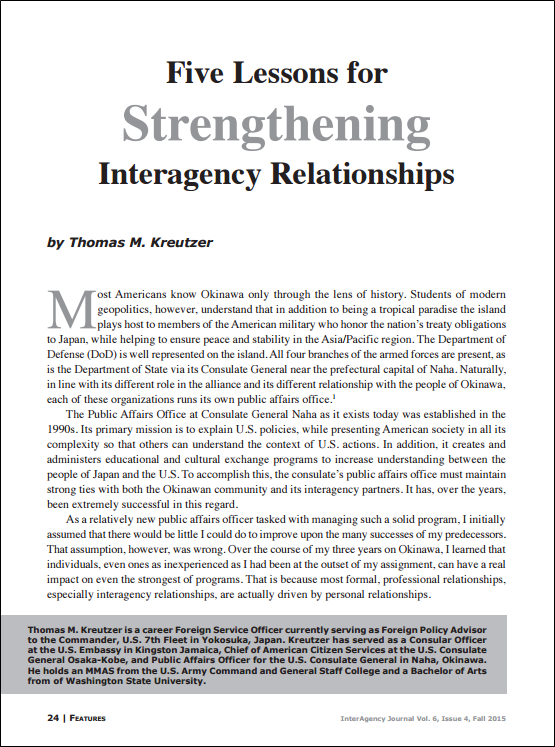 Most Americans know Okinawa only through the lens of history. Students of modern geopolitics, however, understand that in addition to being a tropical paradise the island plays host to members of the American military who honor the nation’s treaty obligations to Japan, while helping to ensure peace and stability in the Asia/Pacific region. The Department of Defense (DoD) is well represented on the island. All four branches of the armed forces are present, as is the Department of State via its Consulate General near the prefectural capital of Naha. Naturally, in line with its different role in the alliance and its different relationship with the people of Okinawa, each of these organizations runs its own public affairs office.

The Public Affairs Office at Consulate General Naha as it exists today was established in the 1990s. Its primary mission is to explain U.S. policies, while presenting American society in all its complexity so that others can understand the context of U.S. actions. In addition, it creates and administers educational and cultural exchange programs to increase understanding between the people of Japan and the U.S. To accomplish this, the consulate’s public affairs office must maintain strong ties with both the Okinawan community and its interagency partners. It has, over the years, been extremely successful in this regard.

As a relatively new public affairs officer tasked with managing such a solid program, I initially assumed that there would be little I could do to improve upon the many successes of my predecessors. That assumption, however, was wrong. Over the course of my three years on Okinawa, I learned that individuals, even ones as inexperienced as I had been at the outset of my assignment, can have a real impact on even the strongest of programs. That is because most formal, professional relationships, especially interagency relationships, are actually driven by personal relationships...