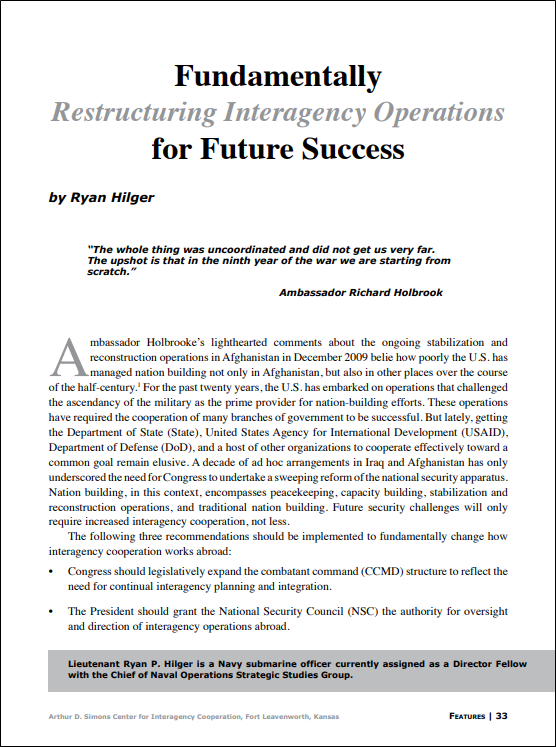 “The whole thing was uncoordinated and did not get us very far. The upshot is that in the ninth year of the war we are starting from scratch.”

Ambassador Holbrooke’s lighthearted comments about the ongoing stabilization and reconstruction operations in Afghanistan in December 2009 belie how poorly the U.S. has managed nation building not only in Afghanistan, but also in other places over the course of the half-century.1 For the past twenty years, the U.S. has embarked on operations that challenged the ascendancy of the military as the prime provider for nation-building efforts. These operations have required the cooperation of many branches of government to be successful. But lately, getting the Department of State (State), United States Agency for International Development (USAID), Department of Defense (DoD), and a host of other organizations to cooperate effectively toward a common goal remain elusive. A decade of ad hoc arrangements in Iraq and Afghanistan has only underscored the need for Congress to undertake a sweeping reform of the national security apparatus. Nation building, in this context, encompasses peacekeeping, capacity building, stabilization and reconstruction operations, and traditional nation building. Future security challenges will only require increased interagency cooperation, not less.