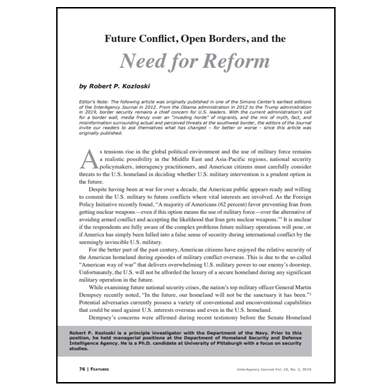 Future Conflict, Open Borders, and the Need for Reform
by Robert P. Kozloski 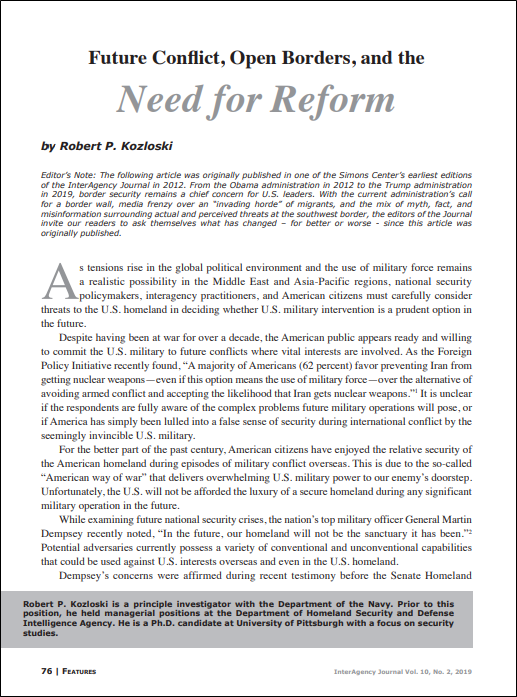 As tensions rise in the global political environment and the use of military force remains a realistic possibility in the Middle East and Asia-Pacific regions, national security policymakers, interagency practitioners, and American citizens must carefully consider threats to the U.S. homeland in deciding whether U.S. military intervention is a prudent option in the future.

Despite having been at war for over a decade, the American public appears ready and willing to commit the U.S. military to future conflicts where vital interests are involved. As the Foreign Policy Initiative recently found, “A majority of Americans (62 percent) favor preventing Iran from getting nuclear weapons—even if this option means the use of military force—over the alternative of avoiding armed conflict and accepting the likelihood that Iran gets nuclear weapons.” It is unclear if the respondents are fully aware of the complex problems future military operations will pose, or if America has simply been lulled into a false sense of security during international conflict by the seemingly invincible U.S. military.

For the better part of the past century, American citizens have enjoyed the relative security of the American homeland during episodes of military conflict overseas. This is due to the so-called “American way of war” that delivers overwhelming U.S. military power to our enemy’s doorstep. Unfortunately, the U.S. will not be afforded the luxury of a secure homeland during any significant military operation in the future…

Editor’s Note: The following article was originally published in one of the Simons Center’s earliest editions of the InterAgency Journal in 2012. From the Obama administration in 2012 to the Trump administration in 2019, border security remains a chief concern for U.S. leaders. With the current administration’s call for a border wall, media frenzy over an “invading horde” of migrants, and the mix of myth, fact, and misinformation surrounding actual and perceived threats at the southwest border, the editors of the Journal invite our readers to ask themselves what has changed – for better or worse – since this article was originally published.

Future Conflict, Open Borders, and the Need for Reform PDF