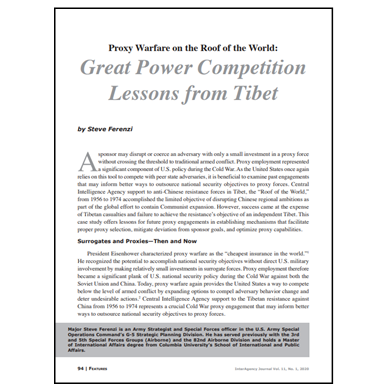 Proxy Warfare on the Roof of the World:
Great Power Competition Lessons from Tibet
by Steve Ferenzi 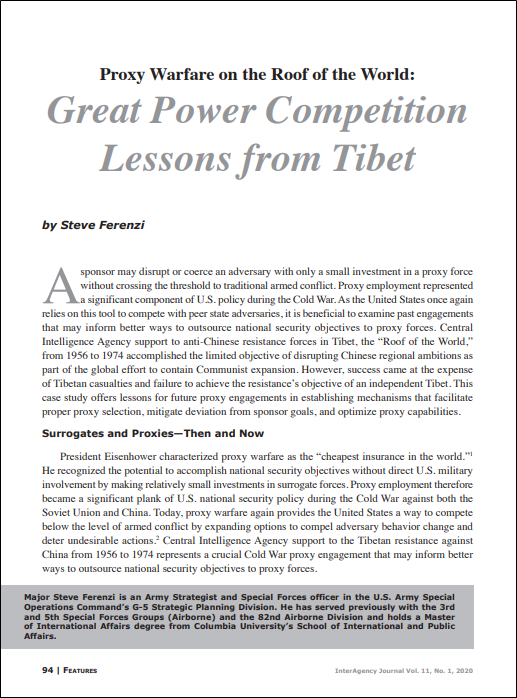 A sponsor may disrupt or coerce an adversary with only a small investment in a proxy force without crossing the threshold to traditional armed conflict. Proxy employment represented a significant component of U.S. policy during the Cold War. As the United States once again relies on this tool to compete with peer state adversaries, it is beneficial to examine past engagements that may inform better ways to outsource national security objectives to proxy forces. Central Intelligence Agency support to anti-Chinese resistance forces in Tibet, the “Roof of the World,” from 1956 to 1974 accomplished the limited objective of disrupting Chinese regional ambitions as part of the global effort to contain Communist expansion. However, success came at the expense of Tibetan casualties and failure to achieve the resistance’s objective of an independent Tibet. This case study offers lessons for future proxy engagements in establishing mechanisms that facilitate proper proxy selection, mitigate deviation from sponsor goals, and optimize proxy capabilities.

President Eisenhower characterized proxy warfare as the “cheapest insurance in the world.” He recognized the potential to accomplish national security objectives without direct U.S. military involvement by making relatively small investments in surrogate forces. Proxy employment therefore became a significant plank of U.S. national security policy during the Cold War against both the Soviet Union and China. Today, proxy warfare again provides the United States a way to compete below the level of armed conflict by expanding options to compel adversary behavior change and deter undesirable actions. Central Intelligence Agency support to the Tibetan resistance against China from 1956 to 1974 represents a crucial Cold War proxy engagement that may inform better ways to outsource national security objectives to proxy forces…

Proxy Warfare on the Roof of the World: Great Power Competition Lessons from Tibet PDF